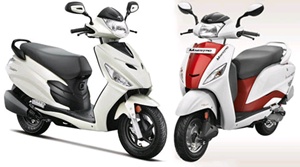 Both scooters come with a newly developed 110cc displacement engine along with added features to attract more customers during the upcoming festive season and give stiff competition to rival Honda's Activa.

In addition to the enhanced cosmetic changes, the second generation Hero Maestro Edge has got several mechanical changes.

For starters,  the Maestro Edge would be powered by a 110.9cc, single-cylinder, air-cooled engine producing maximum power output of  8.4PS as also a maximum torque of 8.3Nm, mated to a CVT.

According to the company, Hero Maestro Edge would have a fuel efficiency of 50kmpl - 60kmpl.

Further, the second-gen Hero Maestro Edge would get a re-designed part-digital instrument cluster, LED tail-lamps, telescopic front forks, drum brakes at front and rear end of the scooter, along with the standard Integrate Braking System.

The new scooter carries a price tag of Rs 49,500 (ex-showroom Delhi) and would be officially launched on 13 October.

The Maestro Edge, targeted primarily at male scooter buyers, comes with a list of features enhancing the premium value of the scooter.

The company has positioned the Hero Duet as a unisex scooter. It would be powered by the same AVL-designed engine as the Maestro Edge.

The Hero Duet, which was recently showcased in India would be launched shortly. The styling had been kept sober in view of the preferences of the masses.