Honda Motorcycle & Scooter India (HMSI), a fully-owned subsidiary of Japan's Honda Motor Corp, has commenced work on its third plant in India in the Narsapur industrial area on the outskirts of Bangalore, with an outlay of Rs1,000 crore. 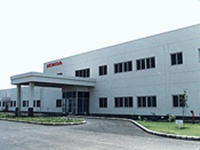 The foundation of the plant was laid on Thursday. Spread over 350,000 sq m, the plant will have a capacity of 1.2 million units a year and will employ 3,000 people. It is scheduled to be operational in the first half of 2013.

This is the third automotive major that Karnataka has been able to attract – Japan's Toyota and Swedish bus maker Volvo already have plants in the state.

The third Honda facility will make both scooters and motorcycles. It will raise HMSI's overall capacity to four million units a year. At present, HMSI produces 1.6 million units from its Manesar plant in Haryana and 1.2 million from Tapukara in Rajasthan.

In a statement, HMSI said it would utilise production technologies refined at its Manesar and Tapukara plants as a starting point, and would ''strive to improve process ergonomics and employ more advanced automation and other measures to reduce the burden on associates at the third plant''.

It added that HMSI is preparing for ''further and rapid growth of the market''. Company officials said that a number of ancillary units would come up around its new plant, which will help them achieve a localisation level of 80 per cent.