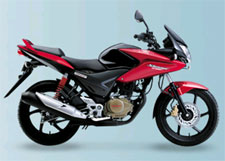 The Rajasthan plant, which is approximately 40km from the company's existing plant at Manesar in Haryana, is scheduled to become operational in the second half of 2011 with annual production capacity of 600,000 units.

The plant will supplement  the company's ongoping capacity expansion  efforts at its existing plant at Manesar in  Haryana, which involves raising the current 1.25 million unit capacity to 1.55 million by the end of this month after the recent openiong of its third assembly line, and a further expansion to 1.6 million units, scheduled for next year.

Honda is betting on volume growth in the country, which is currently the world's second largest motorcycle market behind China.

Industry-wide motorcycle sales in India reached 8.8 million units in 2009, up a healthy 19 per cent compared to 2008 and the company has seen steady sales growth in the last nine years that it has been operating in India (it was established as a wholly-owned two-wheeler production and sales subsidiary of Honda in 1999 and began production in 2001).