Even as it prepares to step out of the geared scooter segment, Honda Motorcycle and Scooter India Pvt Ltd (HMSI) on Friday launched the new version of its gearless scooter Activa. Priced around Rs40,000 for the standard model, the new version is powered by a 110cc engine, and gives 15 per cent better mileage through improved technology. 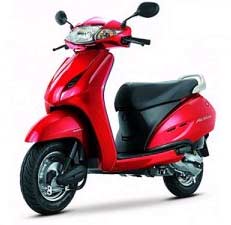 ''Though under test conditions we have got a mileage of 64 km a litre, it will give 55 km a litre to customers. We hope to sell 5.50 lakh new Activa in 2009-10,'' said HMSI Head (Sales and Marketing) N K Rattan at the launch ceremony in New Delhi.

HMSI president and chief executive Shinji Aoyama added, ''We will stop producing Eterno and completely come out of the geared scooter segment to focus more on the fast-growing gearless market.''

Stating that HMSI was looking at a total of 18 per cent growth in its two-wheeler sales in 2009-10, Aoyama said Eterno was selling only about 40,000 units a year, so it was not practical to continue with it. ''However, we will come out with a new model to fill this vacuum,'' he added.

''The Indian two-wheeler market witnessed a growth of five per cent in the current fiscal, whereas we grew by about 17 per cent. We expect to keep this momentum going. For 2009-10, we have set a sales target of 12.5 lakh units, of which 7.4 lakh will be scooters and 5.1 lakh will be motorcycles,'' Aoyama said.

Engineered in an appealing style, the new Activa boasts a number of other features the 'combi-brake' in the deluxe variant, which locks both wheels and enables faster, more stable braking. It also has a 'tuff-up' tube in the rear tyre, halogen lamp headlight, clear turn indicators and an elegant aluminium grab-rail, and increased underseat storage capacity. It is available in six colours.

Aoyama said Activa is one of the company's most popular products in the Indian market. With unisex appeal and providing true value for money, it has changed the definition of a scooter in India and is a highly desired family vehicle, he said.