Ducati's Indian arm today unveiled the M795 at the Auto Expo in New Delhi. Developed specially for Asian markets, this urban entry level Ducati model is attractively priced at INR 6,99,000 (ex-showroom), making it the most affordable Ducati model in India. 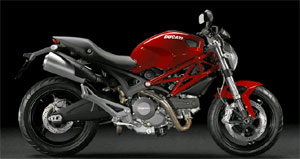 ''Monster has been the Ducati model sold in the highest numbers all over the world: it is an icon and represents an important part of Ducati's history. The new Monster 795 has been thought and developed specifically for the Asian markets and for the growing group of Ducatisti in this area,'' said Bordiga at the launch.

Speaking at the launch, Ashish Chordia, CEO, Ducati India said, ''We have priced it attractively to make it easier for Ducatisti to own their favorite brand. This is an important model for our market and we expect it to contribute to our sales significantly. ''

Founded  in  1926,  Ducati  has  been  producing  sport-inspired  motorcycles  since  1946.  Their motorcycles are characterised by ''Desmodromic'' performance engines, innovative design and avant- garde technology.

These authentic icons of ''made in Italy'' are sold in over 80 countries around the world, with concentration on the European, North-American and Asia Pacific markets. Ducati competes in both the World Superbike Championship and, with an official team, the World MotoGP Championship.