Italian bike manufacturer, Ducati on Monday said it was eyeing a 30-per cent market share in the power bike segment by 2013. 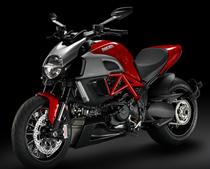 The company, which has Harley-Davidson, Suzuki, Honda, Bajaj Kawasaki and Yamaha Motor as competitors in the category, said it expects to more than double its sales this year.

Speaking on the sidelines of the inauguration of its first showroom in Bangalore, Mirko Bordiga, chief executive for Asia Pacific, Ducati, said, ''We see high demand in the Indian market.''

Ducati also plans to open its dealerships in Hyderabad, Chennai, Cochin, Pune, Chandigarh and Jaipur by the year end.

The bike maker also unveiled the Ducati Diavel at the Bangalore launch. The bike, available at around Rs17 lakh, is powered by a 1200cc engine that generates 162 bhp, and weighs just 204 kg.

''It is a naked bike because it is essential, light and agile: a cruiser because it is imposing and also comfortable with a passenger: and a sports bike because it has a powerful heart, muscles, and levels of performance that take your breath away,'' says Bordiga.

Ducati began India sales in 2008 and offers its entire range of 15 motorcycles such as the Superbike 1098R and Hypermotard 1100S models.