'Micro Bike Security System' is a small hardware device developed for the security of all type of two wheeler vehicles. Micro BSS comprises of a compact hardware unit which is fitted on to the bike, along with a small receiver unit. In the event of movement or tampering of the bike, the owner is immediately alerted through an alarm. 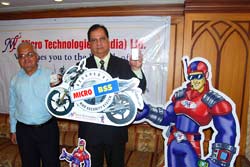 In India, the two wheeler market has recorded an impressive growth in the last few years. The two wheeler market is the biggest contributor to the automobile industry in the country, with a size of Rs. 100,000 million and recorded growth of about 25%. With this recent increase in the sales, especially during the festive seasons, the concern for security has grown. In just Mumbai itself, around 2205 two wheelers were stolen out of which the recovery rate is only around 50%.

"Today, a major chunk of the nation uses motorbikes, and scooters, whose security has become one of the biggest issues,"said Vijay Merchant, VP marketing, Micro Technologies.

"Recognising people's need, Micro Technologies has come up with a very cost-effective security system after extensive research to ensure security for two-wheeler vehicles.

Merchant said, ''While a number of alarm and security systems are available, the Micro BSS is a more proactive way of securing your two-wheeler vehicle, and also enabling the user and the owner of the vehicle to instantly be aware of any tampering that their two-wheeler might be subject to. This is the first step toward the prevention of vehicle thefts in lower vehicle segment in the country."