Spikes of graphene can kill bacteria on implants

A tiny layer of graphene flakes becomes a deadly weapon and kills bacteria, stopping infections during procedures such as implant surgery. This is the findings of new research from Chalmers University of Technology, Sweden, recently published in the scientific journal Advanced Materials Interfaces. 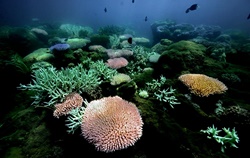 Operations for surgical implants, such as hip and knee replacements or dental implants, have increased in recent years. However, in such procedures, there is always a risk of bacterial infection. In the worst case scenario, this can cause the implant to not attach to the skeleton, meaning it must be removed.
Bacteria travel around in fluids, such as blood, looking for a surface to cling on to. Once in place, they start to grow and propagate, forming a protective layer, known as a biofilm.
A research team at Chalmers has now shown that a layer of vertical graphene flakes forms a protective surface that makes it impossible for bacteria to attach. Instead, bacteria are sliced apart by the sharp graphene flakes and killed. Coating implants with a layer of graphene flakes can therefore help protect the patient against infection, eliminate the need for antibiotic treatment, and reduce the risk of implant rejection.
The osseointegration — the process by which the bone structure grow to attach the implant — is not disturbed. In fact, the graphene has been shown to benefit the bone cells.
Chalmers University is a leader in the area of graphene research, but the biological applications did not begin to materialise until a few years ago. The researchers saw conflicting results in earlier studies. Some showed that graphene damaged the bacteria, others that they were not affected.
"We discovered that the key parameter is to orient the graphene vertically. If it is horizontal, the bacteria are not harmed" says Ivan Mijakovic, Professor at the Department of Biology and Biological Engineering.
The sharp flakes do not damage human cells. The reason is simple: one bacterium is one micrometer — one thousandth of a millimeter — in diameter, while a human cell is 25 micrometers. So, what constitutes a deadly knife attack for a bacterium, is therefore only a tiny scratch for a human cell.
"Graphene has high potential for health applications. But more research is needed before we can claim it is entirely safe. Among other things, we know that graphene does not degrade easily" says Jie Sun, Associate Professor at the Department of Micro Technology and Nanoscience.
Good bacteria are also killed by the graphene. But that's not a problem, as the effect is localised and the balance of microflora in the body remains undisturbed.
"We want to prevent bacteria from creating an infection. Otherwise, you may need antibiotics, which could disrupt the balance of normal bacteria and also enhance the risk of antimicrobial resistance by pathogens" says Santosh Pandit, postdoc at Biology and Biological Engineering.
Vertical flakes of graphene are not a new invention, having existed for a few years. But the Chalmers research teams are the first to use the vertical graphene in this way. The next step for the research team will be to test the graphene flakes further, by coating implant surfaces and studying the effect on animal cells.
Chalmers cooperated with Wellspect Healthcare, a company which makes catheters and other medical instruments, in this research. They will now continue with a second study. The projects are funded by Vinnova (a Swedish government agency).
The making of vertical graphene
Graphene is made of carbon atoms. It is only a single atomic layer thick, and therefore the world's thinnest material. Graphene is made in flakes or films. It is 200 times stronger than steel and has very good conductivity thanks to its rapid electron mobility. Graphene is also extremely sensitive to molecules, which allows it to be used in sensors.
Graphene can be made by CVD, (chemical vapour deposition). The method is used to create a thin surface coating on a sample. The sample is placed in a vacuum chamber and heated to a high temperature at the same time as three gases — usually hydrogen, methane and argon — are released into the chamber. The high heat causes gas molecules to react with each other, and a thin layer of carbon atoms is created.
To produce vertical graphene forms, a process known as "plasma-enhanced chemical vapour deposition' (PECVD), is used. Then, an electric field — a plasma — is applied over the sample, which causes the gas to be ionised near the surface.
With the plasma, the layer of carbon grows vertically from the surface, instead of horizontally as with CVD.
MORE REPORTS