Researchers at Imperial and Warwick find molecules that appear to function abnormally in women who have suffered repeated miscarriages. 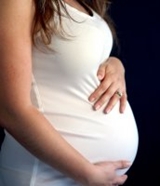 Scientists have identified molecular signals that control whether embryos are accepted by the womb, and that appear to function abnormally in women who have suffered repeated miscarriages.

The research, carried out at Imperial College London and the University of Warwick, suggests these signals could be targets for drugs that would help prevent miscarriage in women who are particularly vulnerable.

At the start of pregnancy, the fertilised embryo must embed itself in the lining of the uterus. The uterus is only receptive to embryos for a few days in each menstrual cycle, ensuring that embryos can only implant at the right stage of development. Currently scientists know only a few details about the biological processes that control when an embryo can be implanted.

In the latest study, published in the journal PLOS ONE, researchers studied chemical signals produced by human cells, taken from the lining of the uterus and grown in the lab. They identified a key role for a molecule called IL-33, which the cells secrete during the receptive phase and which influences the activity of nearby cells.

Normally, the effects of IL-33 and other chemical signals in the lining of the womb are short-lived, which helps to ensure that woman can only conceive during a narrow window. In cells from women who had suffered three or more miscarriages however, high levels of IL-33 continued to be secreted for 10 days, suggesting that the receptivity of the uterus was not being controlled properly in these women.