A new treatment delivered as a regular injection could help patients with high cholesterol levels to reduce their risk of cardiovascular disease. 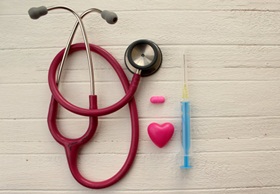 Researchers say the drug, which works by silencing genes in the liver and could be delivered by injection at a GP surgery just twice a year, could help those patients with high cholesterol for whom existing treatments such as statins are not suitable or need to be supplemented.The findings come from the ORION-1 study, in which a team led by researchers at Imperial College London tested the treatment in patients with elevated levels of LDL cholesterol, so-called ‘bad’ cholesterol.
High levels of LDL cholesterol are known to be associated with an increased risk of heart disease, heart attacks and stroke, but other forms of cholesterol can also be harmful.Initial findings from the ORION trial, reported last year, showed that the drug, called Inclisiran, reduced LDL cholesterol levels by almost half on average, and that the treatment was safe for patients and caused no additional side effects.
Now, in a paper published in the journal Circulation, the team has shown the drug also reduces other types of cholesterol and could provide a new treatment option for patients with elevated cholesterol levels who may be at increased risk of cardiovascular disease.
“We know that elevated LDL cholesterol carries an increased risk for patients, but it does not account for all of the 'bad cholesterol',” explained Professor Kausik Ray, from the School of Public Health at Imperial College London, and first author of the paper.
“While we encourage people to make lifestyle changes, such as exercising regularly and eating a healthy diet, if we are just looking at LDL cholesterol we may be underestimating the risk to the patient,” he said. “In this trial, we found that Inclisiran was able to reduce non-HDL cholesterol and the number of bad particles carrying cholesterol apo B as well, in a sustained way.”
According to the researchers, the treatment could help to reduce cholesterol levels in patients for whom existing therapies are unsatisfactory.
A new way to lower cholesterol
Statins are the first line treatment for reducing cholesterol, but the drugs may not be suitable for everyone, with some patients reporting side effects such as muscle pain.
In addition, some patients are unable to take the high doses of statins required, or may have problems with adherence – taking the drugs infrequently or forget to take them at all. The convenience of a twice yearly injection of Inclisiran would mean that once the treatment was given, it would continue to work without burdening the patients with issues of compliance with this treatment.
In the long term the new drug could save the NHS money as the current alternative treatments for those unable to take statins, called monoclonal antibodies, can be expensive.
The new drug is part of a class of drugs called RNA interference therapies, in this case to PCSK9. These treatments target a key protein in liver cells, effectively silencing the gene which produces it.
The PCSK9 protein breaks down receptors on the surface of liver cells which help to remove LDL cholesterol from the blood. But short fragments of RNA – the molecule which carries information from the genes to the cell’s protein-making machinery – can be used to target and ‘silence’ the gene which encodes PCSK9, stopping the protein from being made and so stopping the receptors on the cells from being broken down. The result is a sustained reduction in cholesterol levels.
In the ORION-1 trial, 497 patients with elevated cholesterol levels, the majority of who (79 per cent) were on statin therapy, received either a placebo or the PSCK9 inhibitor Inclisiran. Patients were given varying doses of the drug via injection at Day 1, with final change in cholesterol levels measured 180 days later.
Previously, they reported sustained reductions in LDL cholesterol, with patients seeing an average reduction of 50 per cent with 300 mg dose.
Latest findings
In the latest paper, they report that a single 300 mg dose of Inclisiran, administered at Day 1, lowered non-HDL-cholesterol levels by an average of 35 per cent*. When patients were given a second 300 mg dose at day 90, there was an average reduction of 46 per cent at 6 months.
In addition, they found that all patients who received two injections of the treatment had reductions in key lipoproteins – apolipoproteinB and Lp(a) – as well as non-HDL-cholesterol at the 180 day mark.
According to the researchers, the effect was stable and sustained up to 210 days after initial treatment
“This is a totally different way of reducing PCSK9, by blocking its production,” says Professor Ray. “You stop the gene from ‘talking’ to the machinery and you block the message between the two. All cells have this ability to shut off genes, what we do is tell it which one to shut off. Current approaches, the monoclonals, are akin to using a bucket to collect PCSK9 and replacing the bucket every two weeks when its full. Our approach shuts off the PCSK9 producing tap.”
“A single dose of 300 mg of Inclisiran had a powerful effect, so people who need more cholesterol reduction might go to two injections per year, but for primary prevention in future we might just have one injections a year.”
The researchers are currently carrying out further trials to show the safety and effectiveness of the drug over longer periods of time, and in larger numbers of patients, and expect to have data at the end of 2019.
If further trial results are positive, they estimate the treatment could be approved for patients by drug regulators as early as 2021.
Professor Ray added: “Patient compliance is a huge issue in medicine, and there can be a lot of variability in cholesterol levels when patients have to take a treatment every day. But this treatment continues to work for months after a single injection, with additional effects with a follow up dose. This eventually could become like a vaccine shot for people with high cholesterol.”
The research was funded by The Medicines Company.
MORE REPORTS