An alumnus of IIT Kharagpur, Pushpak is an acknowledged data management authority, a published author and speaker at many international conferences. He spent the early part of his life in India and then relocated to the U.S. where he now works as an Executive IT Architect in the financial & IT services industry. His interest in writing grew after he began his journey into the Corporate and Big Data industry. Pushpak 's first book ‘Data as a Service’was published by the reputed John Wiley & Sons and was very well received by the industry.

In this interview with Swetha Amit, Sarkar talks about the idea behind his book, music as a career option today and his views on success. 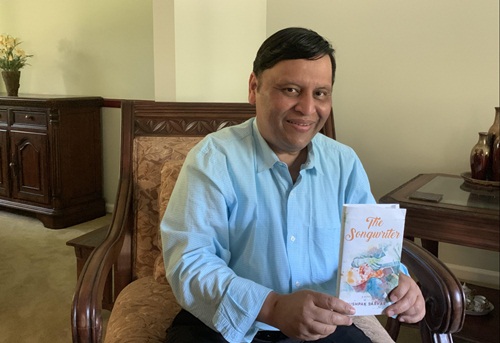 What inspired ‘The Songwriter’? How did the idea come up?
I would say that the idea to write this novel had been lurking inside me for a couple of years now. However, the true inspiration for the novel probably lies in my deep love and passion for music and musicians, right from my school days back in India.
Over the years, as I closely followed the lives of many of the legendary musicians I idolised, I felt intrigued by the highs and lows in their lives.  Take for example, rock legends in the West like John Denver, John Lennon or someone like RD Burman in India. In spite of being loved and admired by millions of fans, when you look into their lives closely you find so much tragedy, heartbreak and sadness that you could almost feel sorry for them. So, this appeared like an interesting angle worth exploring as a theme in my book.
The songwriter is your first attempt in the literary fiction genre. How different was the experience of writing this one as opposed to your previous book?
Writing literary fiction by its very nature, is a very different experience from writing a book on a specialised non-fiction area like technology or management.
Frankly speaking, I was very familiar with the subject matter of my first book titled,Data as a Service (Publisher: Wiley & Sons). I also had decades of professional experience in that area, so perhaps, I felt more in control of the narrative. In contrast while writing my debut novel, I quickly realised that there is a lot more creative freedom while writing fiction. Besides there is a human angle to whatever you write in a novel, so that thrilled me a great deal.
However, on the flip side, as much as you try being creative in fiction, you also need to appear credible to the reader. Striking that balance often appeared challenging, to me personally. So, I leaned greatly on my experienced editor for her advice on that front.
What made you choose music as the central theme for your book?
As I mentioned earlier, music has always been a life-long passion and hobby for me. I am also an amateur musician of sorts, performing at small community events in the US. So, choosing music as the underlying theme for my debut novel seemed an easy choice for me, right from the outset.
Another reason I decided to choose music as the central theme for my book was I felt the story would possibly connect with many readers, especially to fellow music lovers around the world.
You have touched upon the aspect of bullying which is largely prevalent in the society today. How do you think this sort of behaviour should be dealt with?
Unfortunately bullying is a sad reality that one cannot escape as a young teenager today. In fact, certain forms of cyber bullying or harassment may even be growing among some sections. due to enablers like social media and online trolling.
Somewhere and somehow, I find that cyber bullying makes teens meaner and more vicious. Perhaps because of its impersonal form of delivery. In short, the current situation is truly alarming in our society today.
In my view, to effectively deal with bullying, we should first look at its root causes. I mean what causes a child to become a bully? Is this sort of behaviour due to an inherent character trait or caused due to peer pressure? We need to understand this in detail as a society.
In addition, schools should make this a high priority by soliciting feedback from students and brainstorm possible solutions with them on how to counter peer pressure and bullying. Young children also need to be made aware on the evils of bullying right from an early age by parents at home. Lastly the government and media channels could lead efforts in this regard with targeted awareness campaigns aimed to prevent bullying among children.
There is also an instance where music as a career option for the protagonist is frowned upon by his father. Do you think things have changed in society and that, there is more scope for unconventional vocations?
I find that parents have largely become more open-minded and supportive of their children’s choices compared to our times. Many of us can recall how our parents in India would insist that their children only pursue traditional careers like medicine,engineering or stable government jobs.
It is also encouraging to see that the scope for unconventional careers have certainly widened in recent years. Many youngsters can dream of becoming an overnight sensation on YouTube nowadays, if they have the creative talent to back it up. 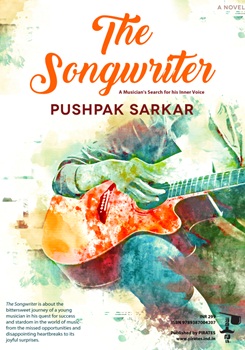 Is it tough for someone who chooses an unconventional stream of vocation to find acceptance in the world?
Well, yes, I certainly think so. Even now it is certainly tougher for someone who chooses an unconventional steam of vocation like music, drama or painting to gain acceptance in society. Consequently, many young, talented people end up making compromises with their career choices when they don’t see too many doors opening.
The sad reality is that many creative people still end up having unfulfilled lives and careers as a result. Of course, there are exceptions in India like MF Husain or Shahrukh Khan who beat all the odds!
However, in the more affluent western countries, it is probably a bit easier for someone interested in an unconventional vocation. Perhaps because there is no dearth of regular jobs if someone fails to realize their dream career.
There is an interesting line in your book which mentions how the protagonist felt like a prisoner of his own success? What is your perspective on success? Does it always come at a price?
That really is an interesting observation. In fact, something I have often wondered about success is the price it extracts from the very successful and famous celebrities.
Success is undoubtedly an elusive commodity that everyone desires in their lives. For an ambitious few, I guess it is the only thing that matters in life.
On the other hand, few may realize that success if not handled well, invariably comes at a price.  As I describe in the book, Ratul deeply misses his privacy from certain sections of the media and paparazzi, after he becomes a big rock star. Even his immediate family and friends suffer as a result of his success and fame in many ways.
Then there is also professional envy to deal with.
So, from my perspective, I would certainly consider success as a mixed blessing.
Lastly, what are your future plans? Any more books in the pipeline?
To be honest I am not a full-time writer. I write only when I get time. As a result, most of my literary projects usually progress very slowly while competing for attention with my professional career and family.
I will also admit that I am giving myself a short break now as I soak in the response from my learned readers on The Songwriter.
However, I do have a few literary projects planned for the future. This includes a novel centered on sports and the human aspect of life and friendship. I am hoping to get started on it very soon.
MORE REPORTS