Former Prime Minister and a Bharatiya Janata Party (BJP) stalwart Atal Bihari Vajpayee passed away in the afternoon today, after undergoing treatment at the All India Institute of Medical Sciences (AIIMS) for the past two months. 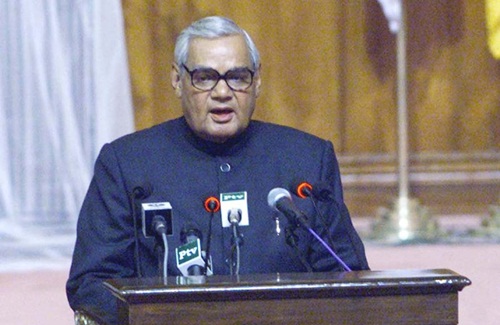 Vajpayee (93), and a diabetic patient, has been undergoing treatment at the AIIMS since 11 June. He was under critical life support for the past 24 hours after his condition deteriorated, the AIIMS said in a release.
"Atal Bihari Vajpayee has been admitted for the last nine weeks at AIIMS. Unfortunately, his condition has worsened over the last 24 hours. His condition is critical and he is on life support system," said a statement from AIIMS.
Vajpayee is known for his earnest efforts at reconciliation with a hostile Pakistan and placing development on the forefront of the country's political agenda.
The former PM has left an enduring legacy for the nation and the region where he was much loved and respected across the political spectrum and national boundaries, including in Pakistan.
Vajpayee is a three-time prime minister and is the only non-Congress prime minister to complete the full term of five years, from 1999 to 2004.
Earlier on Tuesday, Prime Minister Narendra Modi visited AIIMS to enquire about Vajpayee’s health.
AIIMS authorities said that the Prime Minister visited the hospital around 7.18 pm and was with Vajpayee for about 15 minutes.
Union finance minister Piyush Goyal and union textiles minister Smriti Irani also visited AIIMS in the evening around 8.30 pm and 6.00 pm, respectively, to enquire about the health of the 93-year-old BJP stalwart.
Vajpayee was born in the year 1924 he presided over the country’s destiny in the tumultuous period. Vajpayee, a peace lover, stunned the world by making India a declared nuclear state and then almost went to war with Pakistan before making peace with it in the most dramatic fashion.
In the process, his popularity came to match that of Indira Gandhi, a woman he admired for her guts even as he hated her politics.
He also became the best-known national leader after Indira Gandhi and her father Jawaharlal Nehru.
Vajapyee first became the prime minister of the country for just 13 days, from 16 to 28 May 1996, after his deputy LK Advani, chose not to contest elections that year.
His second term came on 19 March 1998, and lasted 13 months, a period during which India stunned the world by undertaking a series of nuclear tests that invited global reproach and sanctions.
But the blasts enabled him to return as Prime Minister for the third time on 13 October 1999, a tenure that lasted a full five-year term.
When finally he stepped down in May 2004, after an election that he was given to believe he would win, it marked the end of a long and eventful political career spanning six decades.
He did his Masters in Political Science, studying at the Victoria College in Gwalior and at the DAV College in Kanpur, Uttar Pradesh, where he first contested, and lost, elections. He began his professional career as a journalist, working with Rashtradharma, a Hindi monthly, Panchjanya, a Hindi weekly, and two Hindi dailies, Swadesh and Veer Arjun. By then he had firmly embraced the ideals of the Hindu nationalist Rashtriya Swayamsewak Sangh (RSS).
His first entry into Parliament was in 1962 through the Rajya Sabha, the upper house. It was only in 1971 that he won a Lok Sabha election. He was elected to the lower house seven times and to the Rajya Sabha twice.
Vajpayee spent months in prison when Indira Gandhi imposed Emergency rule in June 1975 and put her political opponents in jail. When the Janata Party took office in 1977, dethroning the Congress for the first time, he became the foreign minister.
The lowest point in his career came when he lost the 1984 Lok Sabha polls, that too from his birthplace Gwalior, after Rajiv Gandhi won an overwhelming majority following his mother Indira Gandhi's assassination.
He brought into governance measures that created for India a distinct international status on the diplomatic and economic fronts. In his third prime ministerial stint, Vajpayee launched a widely acclaimed diplomatic initiative by starting a bus service between New Delhi and Pakistan's Lahore city.
Its inaugural run in February 1999 carried Vajpayee and was welcomed on the border by his Pakistan counterpart Nawaz Sharif. It was suspended only after the 2001 terror attack on the Indian Parliament that nearly led to a war between the two nuclear-armed neighbours.
The freeze between the two countries, including an eyeball-to-eyeball confrontation on the border for nearly a year, was finally cracked in the spring of 2003 when Vajpayee, while in Kashmir, extended a "hand of friendship" to Pakistan. That led to the historic summit in January 2004 with then President Pervez Musharraf in Islamabad -- a remarkable U-turn after the failed summit in Agra of 2001. Despite the two men being so far apart in every way, Musharraf developed a strong liking for the Indian leader. But reconciliation with Pakistan remained an unfinished agenda for Vajpayee.
MORE REPORTS