Veteran actor and the last surviving son of legendary actor Prithvraj Kapoor, died at the Kokilaben Ambani Hospital, in Andheri, Mumbai in the evening today. 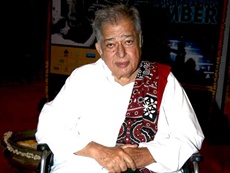 The hospital's CEO confirmed that the star breathed his last at 5:20 pm. Kapoor, 79, was admitted to the hospital, reportedly for chest infection, on Sunday night.

The actor has been suffering from some sort of chest infection ever since he went through a bypass surgery in 2014, say reports. Actor and nephew Randhir Kapoor confirmed the news to the media, but did not elaborate.

Shashi and his wife Jennifer Kendal established the Prithvi Theatre in November 1978 in Mumbai. Jennifer died of cancer in 1984.

It was his closeness to theatre that helped him to adapt to play the character of commoners in films such as Jab Jab Phool Khile and Aa Gale Lag Jaa, where he played middle class characters.

At a time when the debate about the parallel and commercial cinema was getting intense, he chose to adopt a mid way. He remained a mainstream actor but produced offbeat films.

Apart from Ajooba, which was also his directorial debut, all of his production ventures were critically acclaimed. Junoon, Kalyug, 36 Chowringhee Lane, and Utsav showed his concern towards the sustenance of the parallel cinema movement.