The curious case of US Commerce Secretary Ross's missing billions

US Commerce Secretary Wilbur Ross, who is under scrutiny for an investment in a shipping company tied to a Russian oligarch, is now under the scanner for another reason - this time over how much he is actually worth. 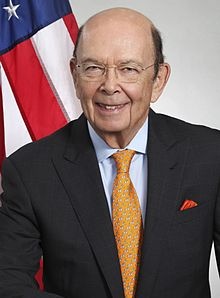 On Tuesday, Forbes published a report claiming that Ross, described as a billionaire on the Forbes list of the 400 wealthiest people since 2004, has ''lied'' to the magazine about his net worth.

The article, a 3,000-word feature written by Forbes reporter Dan Alexander, alleges that Ross repeatedly embellished his net worth by crediting himself with his investors' money.

Forbes ' new list, published online last month, saw Ross left out for the first time in 13 years, because his net worth is now alleged to be below $700 million, based on a federal financial disclosure form that he filed following his nomination to commerce secretary earlier this year.

Last year, Forbes listed his wealth at $2.9 billion, a number Ross at the time allegedly claimed was low.

Ross had argued to Forbes that he had shifted $2 billion in assets into trusts that he had transferred to his family sometime between President Donald Trump's election in November 2016 and Ross' confirmation in February 2017. However, citing privacy, he had declined to provide any documentation to Forbes to prove that claim.

So Forbes went about searching for Ross's ''missing $2 billion''.

''And after one month of digging, Forbes is confident it has found the answer: that money never existed,'' Forbes wrote. ''It seems clear that Ross lied to us, the latest in an apparent sequence of fibs, exaggerations, omissions, fabrications and whoppers that have been going on with Forbes since 2004.''

While the story tracks what it portrays as a web of deception spun by Ross, CNN points out that it also casts a critical shadow over Forbes ' own reporting, and raises serious questions about the credibility of the magazine's widely-cited ranking of billionaires.

Forbes bills the Forbes 400 as "the definitive list of wealth in America," and it has been cited by news outlets the world over. It is also a status symbol for the members of America's gilded class who are interested in such things.

But Forbes wasn't alone in identifying Ross as a billionaire. At the time its story was published on Tuesday morning, Bloomberg also had his worth listed at $2.9 billion. A Bloomberg spokesman said it has not yet changed its valuation of Ross, which the outlet said was based on "the performance of his WLR Recovery funds, disclosed terms of the 2006 sale of his investment firm to Invesco for $375 million and information provided directly by the private equity investor after his nomination to serve in the Trump administration."

In the article, Forbes mentioned the initial $1 billion in wealth it estimated for Ross in 2004. A reporter allegedly conflated Ross's worth with money that had actually come from investors - and Ross had never corrected him.

''Ross was technically the beneficial owner of nearly $1 billion worth of the stock,'' Forbes said. ''But most of that belonged to his investors, not Ross personally.''

From there, Forbes claims that the numbers kept growing.

Prior to publishing the recent article, Forbes said it had sent detailed questions to the department and received this statement:

''Secretary Ross has filed all required disclosures in accordance with the law and in consultation with both legal counsel and ethics officials at the Department of Commerce and Office of Government Ethics. As we have said before, any misunderstanding from your previous conversation with Secretary Ross is unfortunate.''

Fortune also sought to contact the Commerce Department about the secretary, but failed to elicit an immediate response.

About the alleged $2 billion transfer, the department claims it never happened. ''Contrary to the report in Forbes , there was no major asset transfer to a trust in the period between the election and Secretary Ross's confirmation,'' according to its statement to Forbes .