Dina Wadia, the estranged daughter of Pakistan's founding father, 'Quaid-i-Azam' Mohammad Ali Jinnah, passed away at her home in New York on Thursday. She was 98. 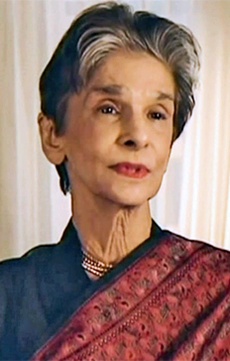 She is survived by her son, the chairman of the Wadia group Nusli N Wadia, daughter Diana N Wadia, and great grandsons Ness and Jeh Wadia, a spokesperson for the Wadia group of companies said in a statement.

There was no official comment in India on her death although her son Nusli is supposedly a close friend of the Nehru-Gandhi family. It is possible that, given the fraught political climate, condolences involving Jinnah's daughter would be passed on privately.

She was not allowed to live in South Court (referred colliquially as 'Jinnah House'), the house Jinnah built at upscale Malabar Hill in Mumbai. Her claim to the house as Jinnah's ''sole heir'' was rejected by the Indian government, which has labelled the property as "evacuee property".

When Dina told her father Jinnah in the 1930s that she wanted to marry young Neville Wadia from a prominent Parsi family of Bombay that had built the famous Cusrow Baug in Colaba and Jer Baug and Rustom Baug in Byculla, he was furious.

Muhammad Currim Chagla, who was Jinnah's assistant at the time, wrote, ''Jinnah, in his usual imperious manner, told Dina that there were millions of Muslim boys in India, and she could have anyone she chose. But she reminded her father he had married a non-Muslim, to which Jinnah replied that 'she did embrace Islam'.''

The young Jinnah had married a Parsi girl, Rattanbai "Ruttie" Petit, who died in 1929. she was daughter of Sir Dinshaw Petit, granddaughter of Dinshaw Maneckji Petit, the founder of the first cotton mills in India.Incidentally JRD Tata was her mother's brother

The independent-minded Dina thus encompassed troublesome contradictions that stalked her father, personally and culturally. Tensions between father and daughter over her marriage to Neville Wadia deepened their aloofness from each other.

While Wadia stayed in India after partition, Fatima Jinnah accompanied her brother to Pakistan. Wadia visited Pakistan only twice, in 1948 when Jinnah died, and in 2004.

To spike the cultural brew for Jinnah, Neville's father was a Zoroastrian who converted to Christianity while Neville Wadia converted back to Zoroastrianism.

The London-born Dina spent a major part of her life in Mumbai but had been living in the US for the past few decades. Her industrialist son Nusli, who shared a close bond with her, had been shuttling between Mumbai and New York, spending a lot of time with her.

Nusli had told The Times of India in 2008, "I speak to my mother once a day every day no matter where I am... I don't think there is any mother-son relationship in the world as close as ours."

Besides Nusli, Dina is survived by her daughter Diana, grandsons Ness and Jeh, and great-grandchildren Jah and Ella. Her funeral will be held in New York.

Dina was born a little after midnight on August 15, 1919 or, as Stanley Wolpert wrote in his book Jinnah of Pakistan, "precisely twentyeight years to the day and hour before the birth of Jinnah's other offspring, Pakistan".

As her parents' marriage floundered and her mother sank into depression - Ruttie was ostracised by her family and the Parsi community for marrying Jinnah - the child (Dina) was neglected to such a degree that for many years she wasn't given a name. She eventually took the name of her maternal grandmother, writes author Sheela Reddy in her book Mr And Mrs Jinnah: The Marriage That Shook India.

On 16 November 1938, she married Neville, the only son of Sir Ness and Lady Wadia, in a ceremony at All Saints Church on Malabar Hill. Her father did not attend the ceremony. Dina and Neville had two children but a few years later, the couple separated.

Later, she repaired her relationship with her father. On 28 April 28, 1947, she wrote congratulating her father on winning Pakistan at least in principle. "I am so proud and happy for you - how hard you have worked for it," she wrote. But Dina didn't visit Pakistan until her father's funeral in Karachi in September 1948.

Tussle over Jinnah House
On 30 May 1939, Jinnah bequeathed his Mumbai mansion to his unwed sister Fatima. To his daughter, he left a monthly income for life from Rs200,000 he deposited in Pakistan's Habib Bank.

After partition, India appropriated immovable and movable property left behind by those who went to Pakistan, designating such assets evacuee property.

Wadia, who moved to New York after divorcing her husband, divided her time between New York, London and Mumbai. She had wanted to spend her remaining days in the home her father built.

She claimed that Jinnah's will was not probated and was therefore not legally binding. The Indian government rejected this, stating that ''the late Fatima Jinnah was his rightful legal heir as Jinnah had willed the house to her. Only Fatima or her legal heir could have applied for restoration of the property''.

The Indian assertion over the house saw Jinnah as an ''important historical figure'', adding that there were ''competing claims based on sentiments attached to his legacy, like that of the Pakistan government.

''While the Indian government respects these sentiments, it cannot yield to them and has therefore decided to convert the bungalow into a South Asian centre for arts and culture, which will foster and nurture the shared cultural ethos of the South Asian region'', the Indian affidavit said.

Wadia's lawyers challenged the view. ''Being the only child of Mr Jinnah, she is the sole heir to his property,'' her lawyer Shrikanth Doijode has been quoted as saying. ''This is the only property in India which she is claiming and which is in the possession of the Indian government at present.''

When nothing worked, Wadia lobbied then prime minister Manmohan Singh. ''It is now almost 60 years since my father's death and I have been deprived of my house... where I grew up and lived until I married,'' she wrote in a letter. ''I request you return it to me.''

Challenging Pakistan's claim on the house, Nusli Wadia said, ''Jinnah House has absolutely nothing to do with Pakistan. It was my grandfather's personal residence and one that he loved dearly. The Pakistani government is nowhere in the picture.''

Backing the Wadia view gleefully was the late Bal Thackeray. ''Today Pakistan is asking for Jinnah House. Tomorrow they may want the Taj Mahal and the day after the Qutab Minar,'' he said.

As Jinnah grew in political stature his personal life suffered devastating blows. His wife, Rattanbai, a Parsi who converted to Islam to marry him in 1918, died in 1929 at the age of 29. After her death, Dina, who was born in London in 1919, was brought up by Jinnah's sister, Fatima.

Dina's marriage destroyed her relationship with her father. He turned very formal, addressing her as Mrs Wadia in public and in private.

During her second trip to Karachi in March 2004, Dina Wadia was accompanied by son Nusli and grandsons, Ness and Jehangir.

They visited Jinnah's grave and laid a wreath.

''This has been very sad as well as wonderful for me. May his (Quaid's) dream for Pakistan come true,'' she wrote in the visitors' book.

Dina Wadia had been at this place only once before - in Sept 1948 after the death of her father. She had never visited Pakistan in Jinnah's lifetime.