Irom Sharmila, the iconic activist who has not eaten a morsel for 16 years in protest against alleged army atrocities in Manipur, ended her epic fast today. 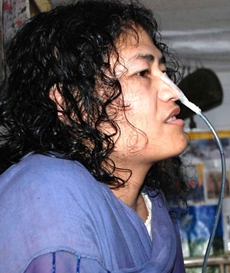 The 44-year-old has been force-fed through a nasal tube for years at a prison hospital in Imphal. She broke her fast at a court, taking the first in a series of steps towards a new life that will include politics and marriage.

In 2000, the death of 10 people in firing by security forces drove Sharmila to launch a hunger strike, to demand the repeal of the Armed Forces Special Powers Act (AFSPA) that gives the Army sweeping emergency powers in the northeastern state.

Today, she is ready to take a different route to this goal. She has said that she will contest elections as an independent candidate and aspires to be the chief minister of  Manipur and remove the draconian AFSPA act.

Her announcement on 26 July that she would end her fast and join politics stunned not just her supporters but also her family (See: Irom Sharmila to end 16-year-old hunger strike on 9 August).

Sharmila arrived in the court in an ambulance amid tight security and informed the court of her decision to end fast.

She urged the court to expedite the process for her release, to which the court agreed and asked her to submit a bond. Sharmila, who had initially refused to sign a bond, later signed a bail bond of Rs10,000 after which she was formally set free. A large number of supporters were with her as she ended her fast, though her 84-year old mother id not attend.

"She is waiting for the moment of her victory which will come only when AFSPA is repealed," said Irom Singhajit, her brother.

Doctors say the activist might have to be on a liquid diet for the next few days.

"A person who has not eaten solid food for 16 years cannot start it suddenly. She has to start slowly and gradually in small quantities," said a doctor at the Jawaharlal Nehru Institute of Medical Sciences Hospital.

Sharmila's struggle has been the pivot of protests against AFSPA in Manipur and other northeastern states.

Those who lost their relatives in firing by security forces say they will continue their fight.

Balo Loitangbom, a close associate of Irom Sharmila, said, "No politician met her in the last  15 years for even 15 minutes. So she wants to change her tactics."

The last time Irom Sharmila tasted freedom briefly, she had hinted that she may break her fast.

She had also spoken about her relationship with a man through letters only. Desmond Coutinho, a Goa-based British citizen, began writing to Sharmila years ago and even met her. Sharmila has said that she wants to marry him.