The world's longest hunger-striker and human rights activist Irom Chanu Sharmila has said she will break her 16-yer-old hunger strike on 9 August and contest in the coming state assembly elections. 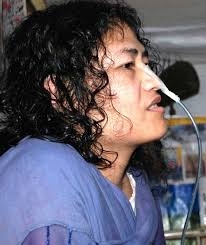 Speaking to reporters outside the Imphal court today, Sharmila said she will break her fast and contest in the Manipur elections, according to a CNN News18 report.

The iron lady has been fasting for nearly 16 years, demanding that the Armed Forces Special Powers Act, or AFSPA, be repealed in the state. Sharmila began her strike in November 2000 after 10 civilians were gunned down by Assam Rifles soldiers at a bus stop in Malom, Imphal.

Born in 1972, Irom Sharmila is the youngest of nine siblings who grew up in Manipur. She gave up her dreams of becoming a doctor and decided to fight against human rights violations in Manipur.

Irom Sharmila is perhaps the only person in the world to keep up her hunger strike steadfastly for 16 years.

The Indian Parliament passed the Armed Forces Special Power Act (AFSPA) in 1958, giving special powers to the armed forces in seven sister states in the North East, which they considered as "disturbed areas". The Act gives the armed forces the power to search anyone's property and arrest people without any warrant.

On November 2000, the Assam Rifles shot and killed 10 innocent civilians at a bus stop in a small town called Malom. Among them was a 1988 National Child Bravery Award winner, and this incident known as the Malom massacre triggered Irom Sharmila to go on a hunger strike against AFSPA.

Irom Sharmila demanded that the Indian government repeal the Armed Forces Special Powers Act (AFSPA) that gave the army extra powers in Manipur. She was arrested and later charged for attempting suicide. When her health deteriorated, she was force fed through a nasal tube to keep her alive even while she was in prison. The government couldn't break her spirit despite arresting, releasing and re-arresting every year on the charge of attempt to suicide. In 2006, she along with other activists conducted a hunger strike at Jantar Mantar in Delhi but was again arrested.

Irom Sharmila's hunger strike got international attention and members of the European parliament too wrote to the Indian government seeking modification of the Act. Two parties came to her support in 2014 and requested that she contest in the Lok Sabha elections. But the government having kept her in prison, she was denied the right to vote since she was in prison.

Neither the UPA government of former Prime Minister Manmohan Singh nor the successor government of Narendra Modi agreed to repeal the Act.

In 2016, Irom Sharmila was released from judicial custody but decided to keep her vow of not going to her house or meeting her mother until the government repealed AFSPA.

Irom Sharmila has now decided to end her fast on 9 August and take the political route to achieve her goal. She has indicated that she would contest the state elections in Manipur next year.