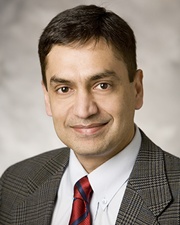 The National Cancer Institute (NCI) has named Madhav V. Dhodapkar as a recipient of its Outstanding Investigator Award.

Dhodapkar is the Arthur H. Bunker and Isabel Bunker Professor of Medicine (haematology), chief of haematology, professor of immunobiology, and co-director of the Cancer Immunology Program of Yale Cancer Center. He will receive $7 million in research funding over seven years from the NCI.

''Dr. Dhodapkar's research has revolutionised our understanding of multiple myeloma and the role of the immune system in controlling cancer. This NCI Award recognizes his outstanding contributions and will allow him to extend his important work in cancer immunology,'' said Dr. Daniel DiMaio, the Waldemar Von Zedtwitz Professor of Genetics and deputy director of Yale Cancer Center.

The new funding will provide Dhodapkar the support needed to continue research in cancer immunology and develop novel ways to use the immune system to prevent myeloma.

Previous research has revealed that nearly all cancers, including myeloma, emerge from precursor states which are much more common than the cancer itself.

Dr Dhodapkar's research team will combine new approaches for early detection and prevention of cancer, and explore how the immune system regulates the transition to cancer.

''Understanding how the transition of pre-neoplastic states to clinical cancer is mediated has fundamental implications not only for cancer biology, but also for developing new approaches to prevent cancer,'' Dr Dhodapkar said. ''This award will propel our research efforts to help us learn much more about the development of myeloma, and subsequently new ways to treat the disease.''