The ministry of external affairs (MEA) today suspended the diplomatic passport of liquor baron Vijay Mallya, after he failed to appear before the investigating authority under the Prevention of Money Laundering Act (PMLA), which is ''tantamount to wilful non-compliance to legal process''. 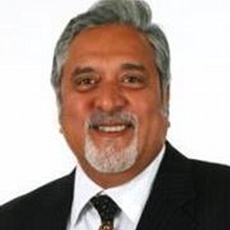 Acting on the Enforcement Directorate's demand, the MEA on Friday suspended Mallya's passport under section 10[A] of the Passport Act, and issued a show-cause notice to the UB Group chairman, seeking his explanation as to why his passport should not be revoked under Section 10 [3] of the Passport Act.

Under the Passport Act, when a person is issued a diplomatic passport, their regular international travel document gets deposited and when a revocation is sought for the former, the latter too gets cancelled.

The MEA will now inform UK authorities about the same and seek for his deportation to India.

The MEA action against Mallya followed his repeated failure to appear before the ED, which accused Mallya of deliberately avoiding personal appearance before the investigating authority in defiance of the due procedure established by law in this case.

Mllya is facing several cases related to irregularities and criminal misconduct, including the offence of money laundering under the Act, and these cases are under investigation by multiple agencies.

Mallya is wanted by the law enforcing agencies for a default of over Rs9,000 crore. The ED had earlier issued summons to Mallya for ''personal appearance'' several times under the provisions of the Prevention of Money Laundering Act (PMLA).

Following Mallya's repeated requests seeking extension, the Enforcement Directorate issued a final summons to the liquor baron, asking him to appear before it on 2 April in the money laundering case, when Mallya sought a 9 April date, but skipped that as well.

It is also apparent that the present course adopted by Mallya is intended to deliberately scuttle the process of investigation. The ED, therefore, moved the ministry of external affairs on 13 April, seeking revocation of his passport

Mallya claimed that the banks gave him loans after evaluating all aspects and asserted that he is not trying to evade the law enforcement agencies. Mallya is understood to have taken shelter in the United Kingdom on a diplomatic passport.

ED sought revocation of Vijay Mallya's passport in connection with its money laundering probe. Officials said the agency has written to the Ministry of External Affairs to take action under the Passport Act, 1967 and ask the Regional Passport Office (RPO) to revoke the diplomatic passport of the beleaguered businessman as he has turned out to be "un-cooperative" with its investigators probing a criminal case under the Prevention of Money Laundering Act (PMLA) at its zonal office in Mumbai.

The agency, sources said, while making the request has also informed that despite cooperating with Mallya thrice by way of providing him fresh dates for personal appearance, the Investigating Officer (IO) of the case has only met with "non cooperation" which is leading to a delay in taking the probe forward.