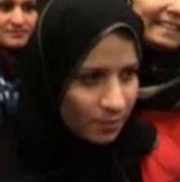 Speaking for the first time since her release from a Lebanese prison in earlier this year, Saja al-Dulaimi, who was married to the most wanted man in the world - Abu Bakr al-Baghdadi, the top leader of ISIS - has revealed the ordeal that her position was and that now she fears for the daughters she bore with him.

Speaking to CNN Swedish affiliate Expressen TV, Dulaimi claimed that Baghdadi was not a bloodthirsty terrorist back then and that he was a university lecturer and a family man. "He was great. He was the children's ideal father. The way he was with children ... he was a teacher - you know how teachers are. He knew how to deal with children, better than how to deal with the mother," she said.

However, she did say that he had a "mysterious personality" which is why they could not talk like other couples did, while admitting that it was difficult being the second wife and that it was hard for two wives to live together.

Dulaimi said she ran away from Baghdadi after she became pregnant. She wouldn't say exactly why, but explained, "I wasn't happy."

Expressing concern for her daughter's safety, she said she is scared of everyone and hopes that her child gets and education abroad.

Dreaming of living a free life in Europe, she added that she wants a better life in a European country and not an Arab one. Dulaimi said it makes her sad to think she will always be thought of as Baghdadi's ex-wife but asserted that Europeans should accept her, regardless of her past relationship with Baghdadi.

"If I'd wanted to live with him, I'd have lived like a princess. I could have moved in with them and had loads of money. But I don't want money. I want to live in freedom, [to] live like everyone else," she said.