A teacher at a refugee camp in Palestine today won a $1 million Global Teacher Prize, beating nine other finalists from around the world, including an Indian. 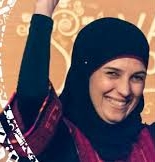 Hanan Al Hroub beat India's Robin Chaurasiya, who runs a non-profit school in Mumbai for girls from the city's red light district of Kamatipura, and eight other finalists to bag the Varkey Foundation's prize at the end of the annual Global Education and Skills Forum in Dubai.

"I did it, I won. Palestine won. All 10 of us have the power, we can change the world," said Hroub, who is in her early 40s, as her name was announced by Pope Francis via video link.

Hroub runs the Samiha Khalil High School in Al-Bireh, Palestine, where she uses a specialist approach she developed herself, detailed in her book We Play and Learn to overcome tense environments of the region under the shadow of the Israel-Palestine conflict.

"I am proud to present to you the message of teachers of Palestine: There is no doubt that we live in unnatural conditions.

"Violence and Israeli occupation surround us from all sides and impose itself and leaks to each corner of educational process and its components, so our task is complicated as we see daily the suffering in the eyes of our students and our teachers. We want our children to live peacefully, as all children of the world," she said, in her part English and part Arabic acceptance speech.

"A child has the right to play. Part of education is to teach children how to play because you learn how to be social through games as well as learn the joy of life," Pope Francis said, in reference to the winning candidate.

Hroub's approach has led to a decline in violent behaviour in schools where this was a frequent occurrence and she has inspired her colleagues to review the way they teach and their classroom management strategies.

"I suggest that this year is the year of the Palestinian teacher. The world should support us to achieve hope for justice and peace," Hroub said.

The Global Teacher Prize, now in its second year, was set up by Kerala-born, Dubai-based entrepreneur and educational philanthropist Sunny Varkey to recognise one exceptional teacher who has made an outstanding contribution to the profession as well as to shine a spotlight on the important role that teachers play in society.

"I want to congratulate Hanan Al Hroub for winning the Global Teacher Prize 2016 from such a huge number of talented and dedicated teachers. I hope her story will inspire those looking to enter the teaching profession and also shine a powerful spotlight on the incredible work teachers do all over Palestine and throughout the world every day," said Varkey.

Bachchan spoke of his own dyslexia and the "incredible impact" teachers have on young minds, while Kumar described teachers as "the only humans in the world that give life to a life".