Pak army chief to step down in November, not to seek extension

The chief of Pakistan's powerful army Gen Raheel Sharif on Monday said he will step down when his term ends in November and that he has no intention to seek an extension of term, making him the first military chief in Pakistan not trying to hang on to power. 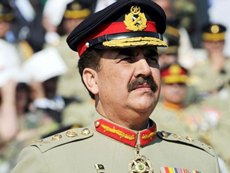 While it is not known what prompted the general to desist from sticking to power, the announcement is expected boost the country's fragile democracy.

It may also create uncertainty over the battle against Islamist militants at a time when Prime Minister Navaz Sharif has pushed the country onto a war-footing against the Pakistani Taliban.

''I don't believe in extensions and will retire on due date,'' Sharif said through his chief spokesman, Lt Gen. Asim Bajwa. ''Efforts to root out terrorism will continue with full vigor and resolve.''

It was under Raheel Sharif that Pakistan army mobilised over 250,000 soldiers into the restive North West in June 2014, backed by Pakistan's air force ginst the Pakistan Taliban. The army largely succeeded in driving Islamist militants from safe havens near the Afghan border.

The operation intensified further after a retaliatory Taliban attack on an army-run school killed about 150 students and teachers in December 2014.

The army chief's announcement could affect Pakistan's fight against Islamist extremist groups as well as efforts to encourage peace talks between Afghanistan's government and the Taliban.

Sharif is widely considered to be a dominant voice in Pakistan's efforts to nudge the Afghan Taliban into formal talks with Kabul.

Under Pakistan's constitution, army chiefs hold the position for three years but are eligible for extensions.

''Thank you Raheel Sharif,'' one of Pakistan's most prominent and progressive columnists, Cyril Almedia, tweeted after Sharif's announced his plans to retire.

Sharif's announcement, however, is widely seen to usher in a new period of unease over the country's future.