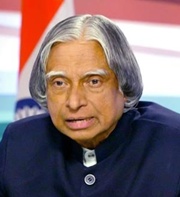 Dr APJ Abdul Kalam, a great scientist, an inspiring leader and administrator and above all, an extraordinary human being, touched the lives of every Indian as no leader has ever done.

A legend in his own life time, Kalam was a great inspiration to all around with his high thinking, motivational spirit, enthusiasm to work and patriotism wrapped in humility.

Perhaps his greatness lies in his humble beginnings. Born as the son of a fishing boat owner in the temple town of Tamil Nadu's southern district of Rameswaram on 15 October 1931, Kalam studied physics and aerospace engineering.

After his studies, he spent four decades as a scientist and science administrator, mainly at the Defence Research and Development Organisation (DRDO) and Indian Space Research Organisation (ISRO).

He was intimately involved in India's civilian space programme and military missile development efforts. He also came to be known as the `Missile Man of India' for his deep involvement in the development of ballistic missile and launch vehicle technology.

For his contribution to the missile programme, he was awarded with Bharat Ratna, the highest civilian award in 1997. He was also awarded Padma Bhushan in 1981 and Padma Vibhushan in 1990.

Post-presidency, Kalam worked as a visiting professor at Indian Institute of Management Shillong, Ahmedabad and Indore and several research and academic institutions across the country and world.

He authored several books with the Wings of Fire, India 2020 and Ignited Minds being the most read best-sellers.

President Pranab Mukherjee said in the death of APJ Abdul Kalam the nation has lost a great son who was people's President during his lifetime and will remain so even after his death.

Terming the death as his personal loss, the President said Kalam was immensely popular and greatly admired. "I pay respectful homage to my late departed friend Kalam."

"His warmth, humility and simple ways endeared him to one and all. He had a special love for children and sought to constantly inspire the youth of our country through motivational speeches and personal interaction," Mukherjee said.

Prime Minister Narendra Modi condoled the death of former President APJ Abdul Kalam and said he has lost a "Marg Darshak" who took India to new heights in the field of science and technology.

"He was a great scientist who contributed immensely in the filed of science and technology as well as space. I have lost a marg darshark.

"He was a source of inspiration for the whole country, particularly the youth. Even in his last days, he remained connected," Modi said.

The sudden demise of former president A.P.J. Abdul Kalam was a tremendous loss to the country, Indian space agency chief AS Krishna Kumar said on Monday.

Krishna Kumar said the former president was a great personality and gentleman.

"It is extremely sad to know that Kalam is no more. He was such a great personality and gentleman. No words to express," the Indian Space Research Organisation (ISRO) chairman said.

Avinash Chander, former head of the Defence Research and Development Organisation (DRDO), recalled the time the two were preparing to test the Agni technology demonstrator in 1989 and said India's strategic missile programme is where it is today because of Kalam's genius.

The human side of Kalam's personality was as legendary as his scientific acumen. One of the scientists working with us was suffering from a life-threatening liver disorder. Kalam went out of his way to get clearances for the scientist to be treated abroad. He cared for people and his team, he said.

Eminent space scientist and former chairman of the Isro, K Kasturirangan, who had a very close association with Dr Kalam, feels that the former President was the simplest man. He valued his friends, their knowledge and never considered himself a big man. He always remembered his childhood and days of struggle. His simplicity and humility were his trademarks.

"Kalam saheb taught us to dream big and made us believe that dreams can come true. He led us on the path of making India the superpower. Kalam sahab's demise is a huge loss. Saddened & shocked!," Fadnavis said in a tweet

Known as the father of India's missile programme who also served as the country's 11th President, Dr Kalam also co-designed a rugged tablet computer for health care in rural areas, wrote The Independent.

A pall of gloom descended on the island of Rameswaram, the native place of former President APJ Abdul Kalam, as the news about his death reached his elder brother and other relatives.

A large number of people gathered in front of the former President's house to offer their condolences and mourn his death.

The former President's brother, Mohammed Muthu Meera Lebbai Maraicker, who is 99, was weeping uncontrollably and demanding to see "the face of his brother," Maraicker's son Jainulabuddin said.

The local mosque had been closed as a mark of respect to the former President. People in the area recalled the soft nature of the former president, who used to be friendly with people even when he was at the helm of affairs.