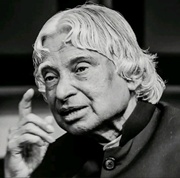 Former president and eminent rocket scientist Dr APJ Abdul Kalam, 84, passed away at the Indian Institute of Management (IIM) in Shillong, while delivering a lecture in the evening today.

Kalam collapsed during the lecture  at around 6.30 pm and was taken to the hospital in an extremely critical condition where he died.

The former President was at the Indian Institute of Management Shillong to attend a function on Livable Planet Earth.

Avul Pakir Jainulabdeen Abdul Kalam was the 11th President of the Republic of India and held the post from 25 July 2002 to 25 July 2007.

Kalam, a renowned scientist, is considered as the main brain behind India's space and missile programme and is eminently known as India's ''Missile Man''.

After his studies he spent four decades as a scientist and science administrator, mainly at the Defence Research and Development Organisation (DRDO) and Indian Space Research Organisation (ISRO).

He was intimately involved in India's civilian space programme and military missile development efforts. He earned the sobriquet of `Missile Man of India' for his work on the development of ballistic missile and launch vehicle technology.

He also played a pivotal role in India's Pokhran-II nuclear tests in 1998, the first since the original nuclear test by India in 1974.

Kalam was elected President of India in 2002 with the support of both the ruling Bharatiya Janata Party and the opposition Indian National Congress. After serving a term of five years, he returned to his civilian life of education, writing, and public service.