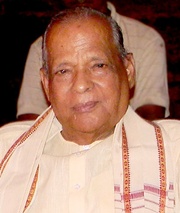 Three-time chief minister of Odisha and a former governor of Assam Janaki Ballabh Patnaik passed away on Tuesday at the temple town of Tirupati, in Andhra Pradesh. He was 89.

Patnaik was in Tirupati to participate in the convocation of Tirupati Sanskrit University where he complained of chest pain late on Monday night. He was admitted to a local but the doctors could not save his life. Patnaik passed away early in the morning.

His body is being brought to Bhubaneswar and his last rites will be performed in Puri, family sources said.

Prime Minister Narendra Modi condoled the passing away of JB Patnaik.  "Shri JB Patnaik's contribution to Odisha's development will always be remembered. Saddened on his demise. Condolences to his family. Shri Patnaik will be remembered as a pillar of Odisha politics, a popular leader always connected with people's views and aspirations," the prime minister said.

Odisha chief minister Naveen Patnaik mourned the death of Patnaik and announced the state would observe seven days of mourning as a mark of respect.

A leader of the Congress party, Patnaik was Odisha's chief minister three times - for two terms during 1980-89 and then from 1995 to 1999 - the longest time on record before Naveen Patnaik. He also served as governor of Assam from 2009 to 2014.

A year later, he became president of the Orissa Congress's youth wing. In 1980, he became the Union minister for tourism, civil aviation and labour.
Patnaik was also a noted writer and had written several books.