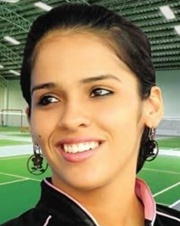 Though the official rankings will be out only on Thursday next week, Saina is assured of the top spot after the reigning world champion Carolin Marin of Spain  lost 19-21 23-21 20-22 to third seed Ratchanok Intanon of Thailand.

World Champion Carolin Marin had, earlier this month, beaten Nehwal in the All England finals.

The 25-year-old Indian, who reaffirmed her status as the country's most consistent performer in the international circuit, will replace Olympic champion Li Xuerui as the women's world number one badminton player, ending China's stranglehold on the game.

Saina now becomes the second Indian ever to become world number one; Prakash Padukone had the distinction of getting into the top ranking in men's badminton.

Saina will now play Japan's Yui Hashimoto in the second semifinal but she will still be No. 1 irrespective of the result

China has long dominated the women's game and the last non-Chinese to be world number one was Denmark's Tine Baun in December 2010.

While Li, who won Olympic gold in London, has struggled with a foot injury, the other contender for the top ranking, Carolina Marin of Spain, lost in the semi-final of the India Open super-series.

In his message, the President said, ''Please accept my hearty congratulations and best wishes on becoming India's first woman to achieve World No 1 ranking in badminton.

''Your success is a matter of great pride for all Indians, especially women. The whole country joins your family and you in celebrating this impressive achievement.

I wish you continued success in your future endeavours''.

"The phenomenal accomplishments of Saina Nehwal make us very proud. I congratulate her on being the World Number 1," the prime minister said.