An eight-year old prodigy of Indian origin is among the experts who will address a cyber security conference in New Delhi starting tomorrow, where minister of state for external affairs V K Singh is listed as a keynote speaker. 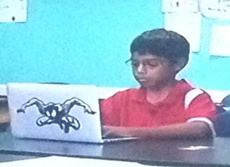 In his address at the summit on 14 November, the US-based Reuben Paul will highlight and demonstrate the need for developing cyber security skills in the current generation, according to the organisers of the Ground Zero Summit.

This is not the first time he has been invited to address such a cyber conference. The organisers said, "8-year-old Reuben Paul gives keynote at Houston Security Conference."

"I started learning about computer languages around a year and a half back. Now I design my own projects," Reuben told PTI.

The whiz kid has been trained by his father, Mano Paul, in Object C programming language and is now learning Swift programming for Apple's iOS platform.

Mano Paul, who was born and grew up in the Indian state of Odisha, moved to the US in 2000.

Reuben in August started Prudent Games, his own gaming firm, and is designated as the chief executive officer of the company. His father Mano is his partner.

"This will be Reuben's fourth conference where he will be giving lecture on cyber security. He will talk about need to create awareness about cyber security among young kids as well as demo white page hacking," Mano said.