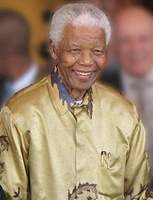 Nelson Mandela, the symbol of South Africa's long-drawn struggle against apartheid and the most respected among world leaders, died on Thursday, at the age of 95.

Mandela, who became the first black president of South Africa at the end of a prolonged struggle and nearly three decades in prison, died at his Johannesburg home, following a lung infection that has gone out of hand.

African President Jacob Zuma, in a live broadcast, announced the news to the nation and the world.

"Our beloved Nelson Rolihlahla Mandela, the founding president of our democratic nation, has departed," said a clearly emotional Zuma. "Our nation has lost its greatest son. Our people have lost a father."

Mandela, who ushered in a multi-racial democracy in South Africa replacing the whites-only rule, was inspired by Mahatma Gandhi's principle of Ahimsa, especially his campaign in South Africa itself during his days as a lawyer.

Mandela also preached against violence although the struggle against the apartheid regime was often marked by violent incidents.

''The Mahatma is an integral part of our history because it is here that he first experimented with truth; here that he demonstrated his characteristic firmness in pursuit of justice; here that he developed Satyagraha as a philosophy and a method of struggle,'' Mandela had said at the unveiling of Gandhi Memorial in South Africa in 1993.

''Gandhi is most revered for his commitment to non-violence and the Congress Movement was strongly influenced by this Gandhian philosophy. It was a philosophy that achieved the mobilisation of millions of South Africans during the 1952 defiance campaign, which established the ANC as a mass-based organisation,'' Mandela had said in his address.

India conferred its highest civilian honour of Bharat Ratna on Nelson Mandela, in 1990 and in 1993, Mandela along with former South African president FW de Klerk was awarded the Nobel Peace Prize for helping to end the despised apartheid regime in South Africa.

Life and times of Mandela
Nelson Rolihlahla Mandela was born in Mvezo on 18 July 1918. He attended Wesleyan college in Fort Beaufort in 1937. Mandela, who boycotted University policies was asked to leave the college in 1939. He completed his BA through correspondence and studied law at University of Witwatersrand.

In 1943, he joined the African National Congress (ANC) as an activist and in 1944 he formed the Youth League of the ANC.

In 1948, Mandela became actively involved in politics, after the National Party, which supported apartheid, came to power.

In 1956, Mandela was arrested and charged with treason. This prompted him to lead the armed wing of the ANC, Umkhonto we Sizwe, in 1961. He was again arrested and sent to prison in Johannesburg Fort in 1962, and two years later, in 1964, he was sentenced to life imprisonment for political activities.

In 1982, Mandela was transferred from Robben Island to Pollsmoor Prison, along with other senior ANC leaders.

The then president of South Africa, PW Botha, offered to free Mandela in 1985, but he refused the conditional offer.

In 1988, Mandela was moved to Victor Verster Prison.

In 1990, the then president FW de Klerk lifted the ban on the ANC and other anti-apartheid organisations, and Mandela was finally released from Victor Verster Prison.

In 1991, ANC held its first national conference with Nelson Mandela as the leader.

In 1993, Nelson Mandela and FW de Klerk were awarded Nobel Peace Prize and a year later, in 1994, Mandela was elected as the first black President of the country, ending years of apartheid.

Mandela retired as president of South Africa in 1999 and decided not to run for second term. He was diagnosed with prostate cancer in July 2001 and has been under treatment ever since.