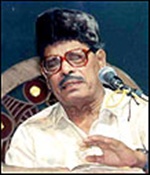 Manna Dey, one of Indian cinema's best known playback voices, is no more. The legendary singer who charmed music lovers across the country, in almost all Indian languages, for more than 60 years, died at Bangalore's Narayana Hrudayalaya early on Thursday.

Dey is survived by his two daughters. His wife Sulochana died last year.

He had been suffering from a lung infection for several months, which saw him in and out of hospitals for a long time.

He almost breathed his last earlier this week, when the hospital authorities allowed the singer's entire family into the ICU.

Manna Dey, who lent his voice to songs in just about any Indian language, was living in Bangalore with his daughter Shumita Deb.

His body will be placed at the Ravindra Kalakshetra for public viewing from 10.30 am onwards today.

Dey, whose real name was Prabodh Chandra Dey, was born in 1919 and grew up in Kolkata. Dey, who was trained by his uncle, started assisting him and other composers in Mumbai as far back as in 1942.

Dey sang his first movie song for the film Tamanna in 1942, the first of more than 3,500 songs in a singing career spanning six decades and several languages.

Some of his most memorable Bollywood songs include 'Aye meri zohra jabeen' in Waqt (1965), Aye bhai zara dekhke chalo from Mera Naam Joker (1970), Zindagi kaisi hai paheli in Anand (1971) and the friendship anthem Yeh dosti from the 1975 blockbuster Sholay.

Pyar hua ikrar hua, Dey's duet with Lata Mangeshkar in the 1955 film Shree 420, is also one the most often plyed songs.

Dey received the Padma Bhushan in 2005 and was honoured with the Dadasaheb Phalke award, the highest award in Indian cinema, two years later.