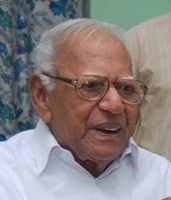 Narendra Modi, who is at the butt of all criticism from both the Congress and the so-called Leftists in the country, is reported to have received the rare honour of a word of approval from none other than retired Supreme Court judge VR Krishna Iyer, a respected Leftist himself.

Justice Iyer is reported to have endorsed the Bhartiya Janata Party's decision to project Narendra Modi as its prime ministerial candidate for the next general elections.

Justice Iyer, who had earlier led the Concerned Citizens Tribunal to Gujarat to look into the 2002 post-Godhra riots and had also directly indicted Modi for the riots, is reported to have written to Modi on his birthday.

Justice Iyer had written to the Gujarat chief minister wishing him on his birthday, according to a statement issued by the Gujarat state information department on Wednesday.

"I am committed to socialism. And I support Mr Modi because he is also a socialist and encourages Gandhian values - protection of human values and rights, brotherhood, justice at social, economic and political field," the release quotes the Justice as saying.

"In the chair of the PM, Mr Modi will fulfil hopes and aspirations of the people of India and uphold national dignity," the letter adds.

It may be remembered that, Justice Iyer, in his 600-page report, had indicted Modi for the 2002 riots and said that the killings were an organised crime carried out by the state government.

Slain Gujarat minister Haren Pandya had also deposed before Justice Iyer's tribunal that in a late-night meeting on 27 February 2002, the CM had allegedly asked officials to let Hindus give vent to their anger.