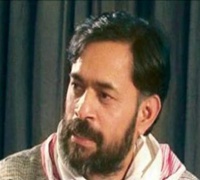 Professor Yogendra Yadav, who faces the sack from the powerful University Grants Commission for his affiliation with Arvind Kejriwal's fledgling Aam Admi Party, has said he would not voluntarily resign from the UGC.

Yadav was served the notice signed by Joint Secretary R P Sisodia on Wednesday which stated that "the continued association of Prof Yogendra Yadav with UGC as member has created a conflict of interest".

Yadav, a senior fellow with Centre for the Study of Developing Societies, has been given seven days to submit a reply; and on Thursday said he would do so rather than resign.

"There is nothing in AAP's ideology, vision, or policies which create any conflict of interest with the objectives or functions of the UGC.

He said the he had informed the ministry of human resource development, under which higher education has been subsumed, about his association with AAP in October last year, when Kapil Sibal was the minister.

"Uma Shankar (Sibal's personal secretary) sought a day's time and reverted the next day, clarifying that the minister has no objection to my continuation in the UGC since this government respects the autonomy of statutory bodies," Yadav told newspersons in Delhi.

Ministry officials however said there was no written communication from Yadav and "even though UGC rules do not put down that a member of a political party cannot be a UGC member, it is, however, implied".

He said he would respond to the show-cause notice served by the HRD ministry but ''would certainly not step down from my post".

Yadav expressed surprise that it took the ministry 10 months to discover that he has joined a party.

He has been vocal against several policies the ministry has initiated.

Slamming the ministry and the UGC, Yadav said their policies go against the spirit of higher education, be it in the matter of allowing the entry of foreign institutions through the back door or imposition of academic performance index scores in universities in a non-autonomous manner.

"I had opposed all these measures because they were not good for higher education in this country," he said.