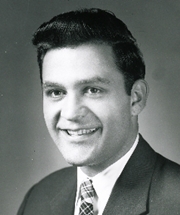 Indian-American engineer and inventor Amar Gopal Bose, the founder of acoustics systems maker Bose Corporation, and a former member of the MIT faculty, passed away on Thursday at the age of 83.

''Amar Bose was a legend at MIT,'' said MIT Chancellor Eric Grimson, who served as a faculty colleague of Dr. Bose in the Department of Electrical Engineering and Computer Science. ''He was an incredible teacher, an inspiring mentor, a deep and insightful researcher. He has influenced multiple generations of students, both directly through the classroom and laboratory, and through the many students he influenced who have themselves pursued careers as faculty, propagating Professor Bose's approach to mentorship and teaching.''

Dr Bose received his bachelor's degree, master's degree and doctorate from MIT, all in electrical engineering, and was asked to join the faculty in 1956. Accepting the invitation with the intention of teaching for no more than two years, he went on to continue as a member of the MIT faculty until 2001.

His long tenure at MIT, saw Bose make his mark both in research and in teaching, as he started a research programme in physical acoustics and psychoacoustics, which led to the development of many patents in acoustics, electronics, non-linear systems and communication theory.

In 1964, Dr. Bose started Bose Corporation based on research he conducted at MIT. From its inception, the company has remained privately owned, with a focus on long-term research.

Throughout his career, he won praise for his excellent  teaching, and in a 1969 letter to the faculty, then-dean of the School of Engineering R L Bisplinghoff wrote, ''Dr. Bose is known and respected as one of MIT's great teachers and for his imaginative and forceful research in the areas of acoustics, loudspeaker design, two-state amplifier-modulators, and nonlinear systems.''

Paul Penfield Jr, professor emeritus of electrical engineering, a colleague of Dr Bose, recalling what made Dr Bose different, said Amar was personally creative, but unlike so many other creative people, he was also introspective.

He added he could understand and explain his own thinking processes and offer them as guides to others. He said he had seen him do this for several engineering and management problems. He added, at some deep level, that was what teaching was really all about.

He said, perhaps that helped explain why he was such a beloved teacher.

Though Bose became fabulously wealthy, thanks to his stake in Bose Corporation (Bose was worth $1 billion in 2011, according to Forbes), he told Popular Science magazine in 2004, that he never went into business to make money. He said he went into business so that he could do interesting things that had not been done before.

To fulfill his lifelong dream to support MIT education, in 2011 Dr. Bose gave to MIT the majority of the stock of Bose Corporation in the form of non-voting shares. Under the terms of the gift, dividends from those shares will be used by MIT to sustain and advance MIT's education and research mission. MIT cannot sell its Bose shares, and does not participate in the management or governance of the company.

Bob Maresca, president of Bose Corporation, said, ''Dr. Bose founded Bose Corporation almost 50 years ago with a set of guiding principles centered on research and innovation. That focus has never changed, and never will. Bose Corporation will remain privately held, and stay true to Dr. Bose's ideals. We are as committed to this as he was to us. Today and every day going forward, our hearts are with Dr. Bose; and we will do everything we can to make him proud of the company he built.''

In 1989, the Bose Award for Excellence in Teaching was established by the MIT School of Engineering to recognise outstanding contributions to undergraduate education by members of its faculty, in order to serve as a tribute to the quality of Dr. Bose's teaching; it is the School's highest award for teaching.

In 1995, the School established another teaching award, the Junior Bose Award, for which recipients are chosen from among School of Engineering faculty members who are being proposed for promotion to associate professor without tenure.

''Amar Bose was an exceptional human being and an extraordinarily gifted leader,'' MIT President L. Rafael Reif said. ''He made quality mentoring and a joyful pursuit of excellence, ideas and possibilities the hallmark of his career in teaching, research and business. I learned from him, and was inspired by him, every single time I met with him.

"Over the years, I have seen the tremendous impact he has had on the lives of many students and fellow faculty at MIT. This proud MIT graduate, professor and innovator was a true giant who over decades enriched the Institute he loved with his energy, dedication, motivation and wisdom. I have never known anyone like him. I will miss him. MIT will miss him. The world will miss him.''

Bose was born in Philadelphia, on 2 November 1929, to Noni Gopal Bose, a Bengali freedom fighter who fled to the US to escape incarceration in British India and married an American school teacher.

He developed an interest in engineering and technology at an early age, and during the Second World War, started repairing radio sets for pocket money and to supplement his family's income.