Doug Engelbart, father of the mouse, dies at 88 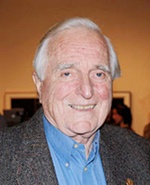 Doug Engelbart, the computing pioneer best known as the inventor of the mouse, has died at the age of 88.

Apart from the ubiquitous mouse – known across the world in both its mammalian and cyber avatars – Engelbart also developed early incarnations of word processing programs, the email, and the internet.

Engelbart died on Tuesday night, according to an email from his daughter Christiana to The Computer History Museum in California, where he had been a fellow since 2005.

She said her father had been in poor health recently and died peacefully in his sleep at home.

The innovator first developed a computer mouse in the 1960s and patented his creation in the 1970s, though the notion of operating a computer with an outside tool was ahead of its time.

Engelbart's first mouse was simply a wooden shell covering two metal wheels, and his invention was so early that he hardly profited from it.

The mouse only became a commercial proposition in 1984, when Apple came out with its new Macintosh.

Engelbart's mouse patent had a 17-year life span and so the technology entered the public domain in 1987, meaning that he couldn't collect royalties on the mouse when it was most in use. At least one billion computer mice have been sold since the mid-1980s.

Eek! A mouse
Engelbart was born in January 1925 and grew up on a small farm near Portland, Oregon. He grew above his roots to excel in academics, and landed a good job with a US government aerospace laboratory in California.

He studied electrical engineering at Oregon State University, but took two years off during World War II to serve as a Navy electronics and radar technician in the Philippines.

It is said to be around 1950 when Engelbart decided that his work was about "augmenting human intellect". This was at a time when computer science was in its nascence.

In 1968, Engelbart dazzled the industry at a San Francisco computer conference with the first public demonstration of the mouse and networked computing. His presentation prompted a standing ovation and became known as the "mother of all demos", as he demonstrated hypertext, shared screen collaboration and video teleconferencing.

At the presentation, Engelbart apologised for the choice of name for his most famous invention. He said; "I don't know why we call it a mouse – sometimes I apologise for it. It started that way and we never did change it."

Among Engelbart's other key developments in computing, together with his colleagues at Stanford Research Institute (SRI) and his own lab, the Augmentation Research Center, was managing multiple windows through one application.

In 1997, Engelbart won the most lucrative award for American inventors, the $500,000 Lemelson-MIT Prize. Three years later, President Bill Clinton bestowed Engelbart with the National Medal of Technology "for creating the foundations of personal computing."

But the mild-mannered Engelbart played down the importance of his inventions, stressing instead his vision of using a collaborative approach to solve the world's problems.