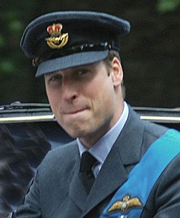 Underlining the fact that colour discrimination between peoples was less pronounced in the pre-Victorian age than it has since become, DNA tests show that Prince William, second-in-line to the British throne after his father Prince Charles, will be first British king with proven Indian ancestry.

Analysis of saliva samples taken from the Duke of Cambridge's relatives has established a direct lineage between the 30-year-old prince and an Indian housekeeper on his mother Princess Diana's side, it was revealed today.

Heir-apparent Prince Charles is purely European. But both his sons are tainted or blessed with Indian blood, depending on one's point of view.

The revelations of His Highness's Indian connection have led to hopes in certain Indian circles that UK royalty will once more make India a priority in their jaded Empire, with more royal or ducal visits.

If Prince William succeeds to the throne, he will become the first Head of the Commonwealth with a clear genetic link to India, its most populous nation.

Although often described as Armenian, the DNA analysis has revealed that she was at least half-Indian and lived in the country's western region.

Scottish scientists established the link after discovering that Eliza's descendants carried a rare strand of DNA - known as mitochondrial DNA - which can only be passed on by a mother.

Only people from the Indian subcontinent have been found to carry the particular strand of DNA. It has been recorded in 14 other people – 13 of them Indian, and one a Nepal native.

The DNA has been passed down to Prince William and his brother Harry. Scientists behind the research described the genetic link as 'unassailable'.

The tests were carried out by genetics expert Jim Wilson from the University of Edinburgh and a group called BritainsDNA.

Interestingly, they said the princes would be unable to pass the DNA to their children.

It has not been revealed which relations of William supplied the saliva samples to allow the DNA to be tested.

Princess Diana's maternal aunt Mary Roach told a UK newspaper, ''I always assumed that I was part-Armenian - so I am delighted that I also have an Indian background.''