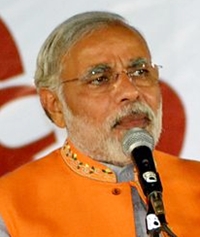 The United States, after remaining a Modi-baiter for long, has now suddenly veered round to appreciating the style of functioning of the Gujarat chief minister and has also invited him to visit the country

A delegation of the US Congress came down to Ahmedabad on Thursday to invite Modi to America, ending Washington's antagonism to the man who is widely considered as the most serious contender for the prime minister's post in the 2014 elections.

America, as reports say, is enamoured by Modi's motto of ''minimum government, maximum governance''. A member of the delegation is reported to have referred to the Gujarat chief minister as a 'very dynamic leader'.

The 18-member delegation, led by Republican Congressmen from Illinois Aaron Schock, met Modi at his official residence today afternoon and held a closed-door meeting with Modi and high-ranking state officials.

Welcoming the US delegation, Modi spoke of the fast and inclusive, environment-friendly development taking place in Gujarat.

"With hard work, we have been able to create an impact in the country," an official statement quoted Modi as saying in discussions with the delegates.

An official press release issued today quoted Schock as saying that there was enormous potential for US to work with Gujarat. He said people in the US were keen to work with Gujarat and they were impressed by the way the state has facilitated investment.

In fact, Schock had made a statement on the floor of the US House of Representatives congratulating Modi after his fourth consecutive victory in the 2012 assembly elections.

Schock , however, refused to say the invitation meant a change of stance at the US State Department, but said he along with other Republican lawmakers, ''will work in that direction with the US administration."

The US decision to de-link Modi's name from human rights violations comes after the UK as also the EU made overtures to the Modi government and a decision by the Wharton India Economic Forum (WIEF) to withdraw an invitation to Narendra Modi ended in widespread protests against the ''gag on free speech''.

The US had, in 2005, denied diplomatic visa to Modi and revoked his already granted B-1/B-2 visa, under a section of the Immigration and Nationality Act, which makes any foreign government official who was responsible or "directly carrying out, at any time, particularly severe violations of religious freedom" ineligible for the visa, in the wake of the post-Godhra riots in 2002.