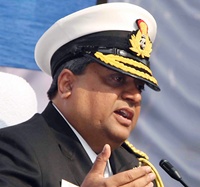 New Delhi: Vice admiral Anil Chopra, currently director general of the Indian Coast Guard, takes over as chief of the Vishakhapatnam-based Eastern Naval Command tomorrow. Adm Chopra remained in command of the ICG for a period of 35 months.

He assumed command of the ICG post 26/11 Mumbai-attack which created circumstances ''which necessitated a much larger mandate for the coast guard," defence ministry officials were quoted as saying here.

With various acquisition proposals maturing over the last three years, the ICG is looking forward to operating with 150 ships, 100 aircraft, 42 coastal stations and 15 air units by 2018.

Officials also said at the current pace of recruitment ICG's personnel strength is likely to reach 20,000 by the end of the decade.

Two long-cherished objectives of the Coast Guard namely, the Coastal Surveillance Network (CSN) and establishment of a Coast Guard Academy have also fructified during Chopra's tenure, they said.

The Eastern Naval Command, one of the two operational commands of the Indian Navy, has jurisdiction over the Bay of Bengal as well as a large part of the Indian Ocean.

This command is also experiencing enhancement of capability and infrastructure needed to meet growing demands of maritime security on the eastern seaboard.