Norman Borlaug: the man who fed a hungry world

The Nobel Peace Prize and Padma Vibhushan winner, who is better known as the father of the "Green Revolution," was credited with saving 1 billion lives worldwide from famine. By Mohan Kakanadan 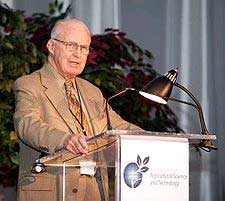 He was awarded the the Padma Vibhushan in 2006, India's second-highest civilian honour, by a grateful nation that achieved food self sufficiency in the '70s thanks to his pioneering work, and a year later was confered the Congressional Gold Medal, the highest civilian honour given by US Congress in 2007.

Borlaug, better known as the father of the "Green Revolution," was credited with saving 1 billion lives worldwide from famine.

During the mid-20th century, Borlaug led the introduction of high-yielding wheat varieties combined with modern agricultural production techniques to Mexico, Pakistan, and India. As a result, Mexico became a net exporter of wheat by 1963. Between 1965 and 1970, wheat yields nearly doubled in Pakistan and India.

The great-grandchild of Norwegian immigrants to the US, Borlaug was born in 1914 to Henry Oliver and Clara Borlaug. Till the age of 19, he worked on the family farm in Iowa.

However, he was keen on continuing his studies and enrolled with the University of Minnesota in 1933. Initially, Borlaug failed the entrance exam, but was accepted to the school's newly created two-year General College. After two quarters, he moved to the College of Agriculture's forestry programme.