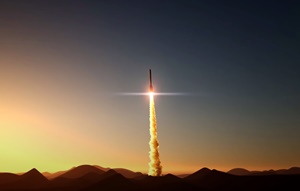 Isro’s Polar Satellite Launch Vehicle in its 51st mission (PSLV-C49) launched EOS-01 as primary satellite along with nine international customer satellites at 3:12 pm IST.
This is Isro’s first mission after the lockdown that started on 25 March. The launch was earlier scheduled for 3:02 PM IST but was delayed by 10 minutes.
EOS-01 is an earth observation satellite intended for applications in agriculture, forestry and disaster management support.
The customer satellites are being launched under commercial agreement with NewSpace India Limited (NSIL), Department of Space.
In view of the strict Covid-19 pandemic norms in place at SDSC SHAR, Sriharikota gathering of media personnel was not allowed at SDSC SHAR. The launch view gallery also remained closed during the launch.
However the live telecast of the launch will be available on Isro website, Youtube, Facebook and Twitter channels.
Isro said EOS-01 and all other commercial payloads have successfully separated from the launch vehicle PSLVC49 and injected into their intended orbit.
The nine foreign satellites include one from Lithuania (R2, technology demonstrator), four from Luxembourg (maritime application satellites by Kleos Space) and four from the US (Lemur multi-mission remote sensing satellites).
The customer satellites were launched under a commercial agreement with NewSpace India Limited (NSIL), Department of Space.
The launch was live telecast on ISRO's official website along with its Youtube, Facebook and Twitter channels.
The Polar Satellite Launch Vehicle (PSLV) is the third generation launch vehicle of India and is the first Indian launch vehicle to be equipped with liquid stages. After its first successful launch in October 1994, PSLV emerged as the reliable and versatile workhorse launch vehicle of India with 39 consecutively successful missions by June 2017.
During 1994-2017 period, the vehicle had launched 48 Indian satellites and 209 satellites for customers from abroad.
Besides, the vehicle successfully launched two spacecraft – Chandrayaan-1 in 2008 and Mars Orbiter Spacecraft in 2013 – that later traveled to Moon and Mars respectively
MORE REPORTS