Indian Space Research Organisation (Isro) is all set to launch its earth observation satellite Cartosat-3 along with 13 nanosatellites from the United States from the Satish Dhavan Space Centre SHAR, Sriharikota, on 25 November. 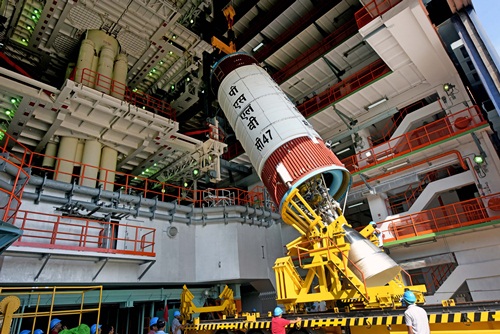 India’s Polar Satellite Launch Vehicle, PSLV-C47 will launch Cartosat-3 and 13 commercial nanosatellites into a sun synchronous orbit from SDSC. The launch is tentatively scheduled at 0928 Hrs IST on 25 November 2019, subject to weather conditions, Isro stated in a release.
PSLV-C47 is the 21st flight of PSLV in 'XL' configuration (with 6 solid strap-on motors). This will be the 74th launch vehicle mission from SDSC SHAR, Sriharikota.
Cartosat-3 satellite is a third generation agile advanced satellite having high resolution imaging capability. The satellite will be placed in an orbit of 509 km at an inclination of 97.5 degree.
PSLV-C47 will also carry 13 commercial nanosatellites from the United States of America as part of commercial arrangement with NewSpace India Limited (NSIL), Department of Space.
Isro will launch two more surveillance satellites called Risat-2BR1 and Risat-2BR2, which will be placed in orbit by the PSLV C-48 and C-49. Isro had earlier launched the surveillance satellite Risat-2B on 22 May and EMISAT (electronic intelligence satellite to help DRDO keep an eye on enemy radars) on 1 April.
MORE REPORTS