Chandrayaan-2 to take off on 15 July, land on Moon by 7 September

The Indian Space Research Organisation (Isro) will launch its second Moon mission – Chandrayaan -2 - on 15 July, in what would be another milestone in the country’s space exploration programme. 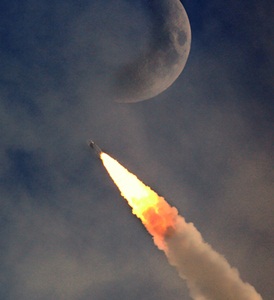 The Indian Space Research Organisation (Isro) on Wednesday unveiled plans for its second unmanned mission to the moon, in what would be another milestone in the country’s space exploration programme.
A GSLV Mk-III rocket, the country’s most powerful launch vehicle, carrying the lunar spacecraft Chandrayaan-2 is scheduled for lift off at 0251 hours on 15 July from the Satish Dhawan Space Centre at Sriharikota in Andhra Pradesh.
Chandrayaan-2 will have three modules, Orbiter, Lander (Vikram), and Rover (Pragyan). These are designed to carry out various experiments, including mapping of the surface, minerals, chemical composition, detection sparse water molecules above the lunar surface and rock formations.
The spacecraft, with an estimated weight of 3.8 tonnes, will attempt a soft landing on the moon. If successful, India will join the US, the former Soviet Union, and China, the three other nations to have achieved the feat so far.
“The launch of Chandrayaan-2 onboard GSLV MkIII-M1 is planned on July 15, 2019 at 02.51 Hrs from Sriharikota,” Isro chairman V Sivan said while briefing the media in Bangalore on Wednesday.
Further, he said the soft landing of the Vikram lander of Chandrayaan-2 on the Moon’s surface is likely to be on 6 September 2019. The briefing included the scientific objectives, challenges and benefits of the mission.
Giving details on the Orbiter, Lander and Rover as well as the challenging tasks of navigating to the Moon and inserting the spacecraft into lunar orbit, Dr Sivan specially mentioned about the highly demanding task of soft landing on the lunar surface and termed it as “15 terrifying minutes.”
“It will take 15 minutes to land and is going to be the most terrifying moment because this is a flight Isro has never undertaken," Sivan said.
Earlier during the day, the media persons had an opportunity to view Chandrayaan-2 Orbiter and Lander at Isro Satellite Integration and Test Establishment (ISITE), Bengaluru.
“This is not only Isro’s mission but the entire country’s," Isro chairman K. Sivan said at a news conference.
Chandrayaan-2 is expected to take a total of 58 days from its launch date to reach the moon and an additional four days for the Lander to land near the south polar region.
The lunar landing is expected to take place on 6 or 7 September on the unexplored south polar region of the Moon — a first for any country — which has the possibility of the presence of water in permanently shadowed areas as well as craters that are cold traps that contain the fossil record of the early solar system.
Chandrayaan-1, which was launched on 22 October 2008, orbited the moon more than 3,400 times and played a crucial part in the discovery of water molecules on the lunar surface, until the spacecraft completed its life cycle and communication with it was lost on 29 August 2009.
Chandrayaan-2 will carry a total of 13 scientific payloads, including eight on the Orbiter, three on the Lander, two on the Rover, as well as one passive experiment from the National Aeronautics and Space Administration of the US.
The Orbiter and Lander modules will be interfaced mechanically and stacked together as an integrated module and accommodated inside GSLV MK-III, the launch vehicle.
The Rover is housed inside the Lander. After its launch by GSLV MK-III, the integrated module will reach the Moon orbit using the Orbiter propulsion module.
Following this, the Lander will separate from the Orbiter and soft land at a predetermined site close to the lunar South Pole.
The Rover will roll out and carry out scientific experiments on the lunar surface. Instruments are also mounted on Lander and Orbiter for carrying out scientific experiments.
The Orbiter will continue its task while the Rover comes out of the Lander after it has landed on the Lunar surface. “It’s a very slow operation. Subsequently, the Rover will move on to the moon. It will move at a speed of 1cm per second and will cover 500 metres," Sivan said.
The entire lifecycle of the Lander and Rover will be one lunar day, which is equivalent to 14 earth days while the Orbiter will continue for one year.
The Orbiter and Lander will be able to communicate with Earth directly, while the Rover will share information, images and data to the Lander which in turn will share it with Isro.
Sivan said the Rs1,000-crore mission was supported by more than 500 academic institutions and 120 industries that contributed 60 per cent of the Rs603 crore cost of Chandrayaan-2 and 80 per cent of the Rs375 crore cost of the Geosynchronous Launch Vehicle-Mark III.
MORE REPORTS