Former Isro scientist Nambi Narayanan, who was made a sacrificial goat in a political rivalry between two factions of the Congress party in Kerala, got some solace after the Supreme Court awarded him a compensation of Rs50 lakh for illegal confinement and loss of job. 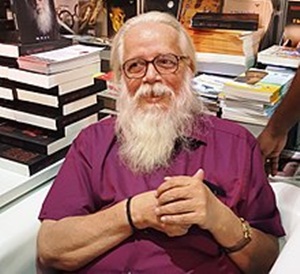 Nambi Narayanan, a former scientist with the Indian Space Research Organisation (Isro) was arrested on charges of selling state secrets to enemy countries when K Karunakaran was the chief minister of Kerala and was in control of the home ministry.
It was alleged that the police, with the connivance of the rival faction in the ruling Congress party opposed to Karunakaran, arrested Nambi Narayanan on the fictitious charge of selling Isro’s secrets to some Maldivians, and illegally confined to prison resulting in his loss of job and personal esteem.
He was later cleared of all charges. However, the police and their political bosses remained out of bounds of the judicial process, so far.
The SC has now ordered that the compensation be sourced from the Kerala police officers who arrested Nambi Narayanan on false charges.
The apex court also formed a three-member committee headed by retired SC judge DK Jain to inquire into the role of Kerala police officers in the arrest and torture of the scientist. KK Joshua, Sibi Mathews and S Vijayan were the officers from whom the compensation will be sourced.
Nambi Narayanan is a former ISRO space scientist was arrested in December 1994 after being accused of selling state secrets pertaining to confidential test data from rocket and satellite launches. Charged with espionage, the case was transferred to the Intelligence Bureau (IB) for investigation. He was in custody for 50 days, and after his release, he claimed that the IB officials who interrogated him wanted him to testify falsely against some of his superiors.
The Central Bureau of Investigation (CBI) then took over the case and found no evidence linking him to the alleged sale of state secrets to other countries. The charges against Nambi Narayanan were dismissed by the CBI in 1996 and subsequently by the Supreme Court which declared him not guilty in 1998 and awarded him a compensation of Rs1 lakh which was to be paid by the Kerala government.
Nambi Narayanan then approached the National Human Rights Commission (NHRC) seeking compensation for the torture and mental agony that he and his family members were subjected to during the case. The NHRC directed the Kerala government to pay Rs10 lakh as compensation to Nambi Narayanan.
The Supreme Court will erase all the adverse records against a person to restore his reputation, besides the Rs50 compensation.
MORE REPORTS