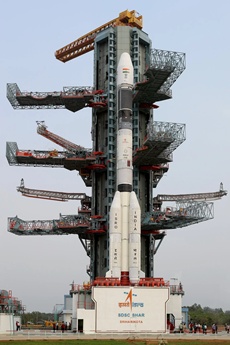 The GSLV-FO8 carrying the GSAT-6A took off from the Second Launch Pad (SLP) at the Satish Dhawan Space Centre SHAR at Sriharikota at 16.56 hours on Thursday.
The nearly 50-metre tall GSLV, which also weighs about 415 tonnes, successfully placed the 2,140-kg GSAT-6A satellite on a geostatic transfer orbit at a height of 36,000 km.
The GSLV-FO8 injected the satellite into orbit 18 minutes after lift-off. The satellite will provide multi-beam coverage facility to mobile communication.
In the coming days, scientists will fire the thrusters onboard the satellite to manoeuvre it to a geostationary orbit.
Isro chairman K Sivan said the mission was a success and the satellite was placed in the designated orbit. Isro will be testing critical systems meant for the second lunar mission. The satellite will also boost communication services for the defence forces.
The successful launch of the communication satellite GSAT-6A into orbit also sets the ball rolling for its bigger missions in the future.
The space agency tested certain improved critical systems in the launch vehicle — GSLV Mk-II — that may eventually be used in its future missions, including the country’s second lunar mission.
It was the Geosynchronous Satellite Launch Vehicle’s 12th flight and sixth with indigenous cryogenic upper stage.
“GSAT-6A, a communication satellite, will provide new possibilities for mobile applications. Proud of @isro for taking the nation towards new heights and a brighter future,” PM Narendra Modi tweeted.
“This GSLV is not like any other vehicle. The importance of this mission is that we have enhanced the performance of the vehicle with an improved high thrust Vikas engine that has increased thrust by 6 per cent thereby enhancing payload capability by 50 per cent,” said the Isro chairman after the mission was declared a success.
“Isro has high profile launches with 10 missions planned for the next nine months. They include space science, communication, navigation, high resolution remote sensing and high bandwidth for communication. The highlight will be Chandrayaan-2,” he added.
The second stage also had electromechanical actuation system replacing electrohydraulic actuation system to enhance the reliability of the rocket. Officials said any improvement done to the vehicle would be incorporated into GSLV’s future missions, including Chandrayaan-2 planned for October 2018.
GSAT-6A, similar to its predecessor GSAT-6, is a high power S-band communication satellite with a mission life of around 10 years.
MORE REPORTS