Signalling China's rising economic clout, the International Monetary Fund (IMF) has announced that its currency, the yuan, will join the fund's basket of reserve currencies. 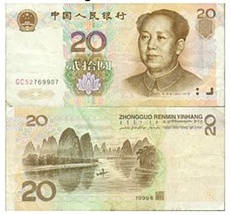 Currently just the US dollar, the euro, the yen and the pound are in the group.

The IMF said the yuan ''met all existing criteria'' and should become part of the basket in October 2016.

IMF chief Christine Lagarde said it was "an important milestone in the integration of the Chinese economy into the global financial system".

It is also recognition of the progress that the Chinese authorities have made in the past years in reforming China's monetary and financial systems, she added.

The yuan will now make up part of the IMF's Special Drawing Rights (SDR) - an asset created by the IMF which serves almost as a currency.

It is used for transactions between central banks and the IMF, as well as to decide the currency mix that countries like Greece, for example, receive when the IMF provides financial aid.

The last change made to the basket was in 2000, when the euro replaced the German mark and the franc.

China is the world's second largest economy behind the US and had asked for the yuan to become a reserve currency last year.

New economic reality
This move is seen as a powerful symbol of China's meteoric rise, from poverty to a pillar of the global economy.

Apart from being a major statement of how the world economy has changed, there could also be some real benefits to China.

If the currency's elevated status leads to more of it being held by central banks and businesses, it would be helpful for the government's finances. A state's monopoly over the issue of currency indirectly gives it an extra source of revenue.

But the main point is that the decision is a new way of conveying the increasingly apparent message that China has a central role in driving the performance of the world economy.

Some analysts have suggested that by 2030 the yuan will become one of the top three major international currencies, together with the dollar and the euro.

Concerns about Beijing keeping the yuan artificially low to help exporters is one reason the currency has previously failed to meet the criteria for reserve currencies set out by the IMF.

However, Chinese officials have a made a concerted effort to build support for the yuan's inclusion, and a recent IMF staff report endorsed such a move.

Initially, the currency's inclusion would be largely a symbolic gesture, some analysts have said.

They have also said the yuan's continuing inclusion in the basket would depend on whether China progresses with its financial reforms.