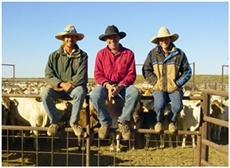 Under the deal, Rinehart's real estate unit Hancock Prospecting will own 67 per cent and Shanghai CRED 33 per cent of Australian Outback Beef, a new joint venture created to buy Kidman.

The new JV was created to appease the Australian regulator, which had in April rejected an A$371-million ($281.3 million) bid by a Chinese consortium led by Shanghai CRED and Hunan Dakang Pasture Farming.

The deal is conditional on Kidman divesting its Anna Creek Station and Peake to other Australian grazing interests, and the sale proceeds will be retained by Kidman for the benefit of Australian Outback Beef.

With Gina Rinehart's political closeness with the ruling conservative lawmakers, this deal is likely to pass regulatory hurdles, say analysts.

Australian deputy prime minister, Barnaby Joyce, has welcomed the deal, an indication that the transaction will get pass the regulators.

"We welcome the significant investment proposed in addition to the purchase price and are confident that the Kidman business will be in good hands,'' Kidman chairman, John Crosby said.

Adelaide-based Kidman is one of Australia's largest beef producers, with an average herd carrying capacity of 185,000 cattle. It has pastoral leases covering 101,000 kms in three states and the Northern Territory.

Its cattle stations produce grass-fed beef for export to Japan, the US and South East Asia.

The deal is subject to approval from Australia's Foreign Investment Review Board and the Chinese government.