New York has overtaken London as the world’s most attractive financial centre as Britain’s decision to leave the European Union prompted banks to shift jobs out of the city to preserve access to Europe’s single market, a survey has revealed.

Since Britain voted to leave the European Union common market more than two years ago, several finance companies, including some of the world’s most powerful ones, have been looking for ways to preserve the existing cross-border flow of trading after the UK leaves the bloc in 2019.
New York took first place, just two places ahead of London, followed by Hong Kong, Singapore, Shanghai, Tokyo, Sydney, Beijing, Zurich and Frankfurt among the top 10 financial centres as per the Z/Yen- CDI index of financial centres released today.
The 24th report - Global Financial Centres Index (GFCI 24) - published by Z/Yen Partners and the China Development Institute (CDI) ranks 100 financial centres on factors such as infrastructure and access to high quality staff.
Shanghai overtook Tokyo to move into fifth place in the index gaining 25 points in the ratings. Beijing, Zurich, and Frankfurt moved into the top ten centres, replacing Toronto, Boston, and San Francisco.
Today Z/Yen Partners and the China Development Institute (CDI) publish the twenty-fourth Global Financial Centres Index (GFCI 24). We are holding the launch Conference in Guangzhou. The GFCI rates 100 financial centres. The top ten are shown to the right. Full details are available here.
The main headlines are shown below:
Not for the first time, New York took first place in the index, just two points head of London. However both centres fell slightly in the ratings. Hong Kong is now only three points behind London. Shanghai overtook Tokyo to move into fifth place in the index gaining 25 points in the ratings. Beijing, Zurich, and Frankfurt moved into the top ten centres, replacing Toronto, Boston, and San Francisco.
In Western Europe, Zurich, Frankfurt, Amsterdam, Vienna, and Milan moved up the rankings significantly. These centres may be the main beneficiaries of the uncertainty caused by Brexit. Surprisingly, despite some evident success in attracting new business, Dublin, Munich, Hamburg, Copenhagen, and Stockholm fell in the rankings, reflecting respondents’ views of their future prospects.
The leading Asia/Pacific centres performed well, closing the gap on London and New York at the top of the rankings. Centres in the Asia/Pacific region generally rose in the ratings, continuing the trend which has been apparent over several years. There were steady increases for Shanghai, Sydney, Beijing, and Guangzhou.
GIFT City (Gujarat) and Hangzhou entered the index for the first time.
North American centres fell back in the rankings and ratings overall. However, Los Angeles and Washington DC gained places in the index, with Washington DC reversing the fall it experienced in GFCI 23.
In Eastern Europe and Central Asia, there were significant gains for Astana, Budapest, St Petersburg, and Tallinn. Astana only officially launched their financial centre in July, and it is unusual for such a new centre to perform so strongly. The strong performance of Tallinn may reflect Estonia’s development of the e-society, including digital identity and smart ledger development, providing an alternative focus for Tallinn’s competitiveness. Cyprus and Warsaw fell significantly in the ratings and rankings. Sofia was a new entrant to the index.
The Middle Eastern centres Dubai, Abu Dhabi, and Doha all rose significantly reversing the trend from GFCI 23. Cape Town is the highest new entrant to the index, ranking 38th in its first entry.
There were mixed results in the Caribbean and Latin America. Bermuda, Sao Paulo, Mexico City, and Rio de Janeiro performed strongly, while other centres fell in the rankings.
Island centres fell in the index, with the exception of Bermuda, which rose six places. The British Crown dependencies of Jersey, Guernsey, and the Isle of Man all fell significantly in the rankings, with the Isle of Man dropping 27 places in the index.
Mark Yeandle, Director of Z/Yen and the author of the GFCI, said: "In GFCI 23 the leading centres all rose and the lower ranked centres fell. There is a much less clear pattern in GFCI 24. London and New York both few slightly, Asian centres did well and the North American centres fell back a little. Europe continues to interest us with potential beneficiaries of Brexit such as Frankfurt and Zurich doing well.”
Professor Michael Mainelli, Executive Chairman of Z/Yen, said: "Far too much attention is focused on the top centres and the blow-by-blow rankings they have.  The long-term trend since our first published edition in 2007 has been the consistent and persistent rise of Asian centres while the press and pundits focus on brief headlines about London and New York City.” 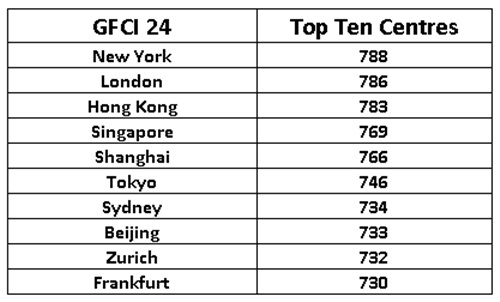