3:30 pm Market Closing: Benchmark indices closed flat on Friday as investors await March quarter earnings season that will be kicked off by Infosys next week.

The 30-share BSE Sensex was up 30.17 points at 33,626.97 and the 50-share NSE Nifty rose 6.40 points to 10,331.60.
About 1,599 shares advanced against 1,062 declining shares on the BSE.
Lupin, Titan, BPCL, HPCL, Tata Steel, Sun Pharma and Bajaj Finance were top gainers among Nifty50 stocks, rising up to 3 percent.
Infosys, Vedanta, L&T, Bharti Airtel and HCL Technologies were down up to 2 percent.
3:15 pm Market Outlook: Guggenheim Chief Investment Officer Scott Minerd sees a tough road ahead for the market and economy, with a sharp recession and a 40 percent decline in stocks looming. He warned clients that the market is on a ‘collision course with disaster,’ expects the worst of the damage to start in late 2019 and into 2020. Minerd expects the Fed to intervene to stem the crisis, but says that will only make matter worse, reports CNBC.
3:05 pm Green Nod: State-run HPCL received the environment clearance for setting up of a new LPG plant with bottling and storage facilities in East Champaran, Bihar that will entail an investment of Rs 136.4 crore.
This will be the third LPG plant in the state. Currently, Hindustan Petroleum Corporation Ltd (HPCL) has only two LPG plants in Bihar at Patna and Purnia with a bottling capacity of 50,000 cylinders per day.
As per the proposal, the HPCL wants to construct mounded storage vessels with a capacity of 1,050 tonnes and bottling capacity of 120 tonnes per annum in an area of 30 acres in Panapur and Kubeya villages in East Champaran district.
2:58 pm Pump stocks rally: Shakti Pumps rallied 15 percent. Roto Pumps gained 8 percent.
2:48 pm Buzzing: Shares of Ballarpur Industries surged 12 percent intraday as the company is going to sell entire assets of its Malaysian unit, Sabah Forest Industries Sdn Bhd.
A sale and purchase agreement has been entered into between Sabah Forest Industries Sdn. Bhd. and Pelangi Prestasi Sdn. Bhd. for the sale of entire assets (including procurement of fresh timber licenses from the State Government of Sabah) of Sabah Forest Industries Sdn. Bhd for consideration of RM 1.2 billion ( approximately USD 310 million).
2:35 pm RCom allows to proceeds with asset monetisation: Reliance Communications said as directed by the Supreme Court, the company moved the NCLAT today for vacation of the stay in relation to sale of its tower and fiber assets. The SC had itself vacated the stay in relation to spectrum, MCNs and real estate yesterday.
By an interim order passed today, the NCLAT has vacated the remaining stay, and allowed execution of sale deeds and deposit of the proceeds with SBI in an escrow account.
Based on these orders, the company can now proceed with completion of its entire asset monetisation plan, covering spectrum, towers, fiber, MCNs and real estate.
RCom is now very confident of achieving overall debt reduction of approximately Rs. 25,000 crore within the next few weeks, from its asset monetisation programme.
2:25 pm Buzzing: Amtek Auto share price is locked at 5 percent upper circuit at Rs 22.25 after the Committee of Creditors (CoC) approved resolution plan submitted by Liberty House, the part of Sanjeev Gupta's global industrial group GFG Alliance.
The auto ancillary company informed exchanges on Thursday that the Committee of Creditors of Amtek Auto has approved the resolution plan submitted by Liberty House Group Pte Ltd. through e-voting process.
The e-voting process was held during April 4-5, after the meeting of Committee of Creditors held on Monday, April 2.
2:15 pm Gainers: Titan Company, BPCL, HPCL, Lupin and Sun Pharma are biggest gainers, rising up to 4 percent.
HDFC Bank, ITC, Bajaj Finance, IOC, Tata Motors and Reliance Industries were up 0.2-0.9 percent.
2:08 pm Market Update: Benchmark indices continued to consolidate around previous day's closing values amid US-China trade war. Investors await corporate earnings that will begin next week.
The 30-share BSE Sensex was down 19.86 points at 33,576.94 and the 50-share NSE Nifty fell 13.80 points to 10,311.40.
About 1,405 shares advanced against 1,093 declining shares on the BSE.
2:01 pm Crude Update: Oil prices fell after US President Donald Trump's threat of new tariffs on China reignited fears of a trade war between the world's two biggest economies.
President Trump said on Thursday he had ordered US trade officials to consider tariffs on USD 100 billion more of imports from China, escalating tensions with Beijing.
Brent crude for June delivery was down 0.5 percent, at USD 67.99 per barrel while US West Texas Intermediate crude for May delivery was down 0.5 percent, at USD 63.22 a barrel.
1:50 pm Pharma Stocks in Focus after USFDA approved Lupin's plant: 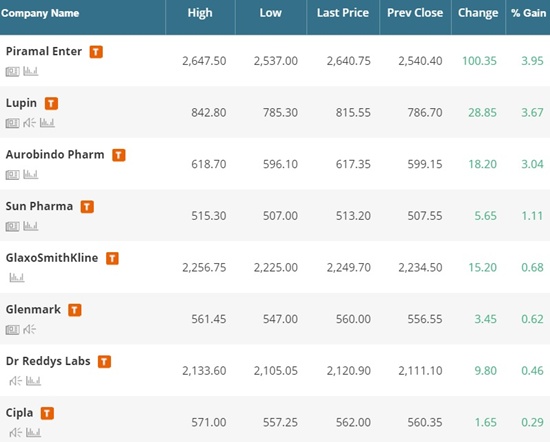