3:30 pm Market at Close: Benchmark indices ended the session on a weaker note, with the Nifty closing below 9900-mark.

ITC, Reliance and GAIL lost the most on both indices, while Asian Paints, BHEL and Eicher Motors gained the most.

"If we assume upgrades continue and we track MSCI Asia Ex-Japan's performance in 2004, there appears to be a further 14 percent potential upside," she said.

Siva further said, "While the last 5 years has been associated with slowing return on equities and a de-rating of price-to-book value, our third blue sky scenario assumes a re-rating of P/B to 10 percent above its historical average as RoE rises towards its longer-term historical average which suggests 15 percent upside potential."

While downgrading the stock to hold with a target price of Rs 3,430, ICICI Securities said it believes this would increase the blended tax incidence per stick from Rs 2.3 to Rs 2.9.

The research house believes the change will increase the indirect tax incidence on the company significantly by 29 percent.

The company had posted a net profit of Rs 39.25 crore in the April-June quarter of the previous fiscal.

2:20 pm Market Outlook: According to Ashwini Agarwal, Co-Founder & Partner of Ashmore Investment Management India LLP, valuations are challenging in many areas of the market so one has to be cautious and careful.

In fiscal 2019 and 2020, he expects to see much better earnings growth. Maybe not in fiscal 2018 itself because Q1 of FY18 will see a lot of upheavals because of de-stocking from goods and services tax (GST), he further mentioned.

According to the cement firm, government spending on infrastructure, rural and affordable housing will be key demand drivers.

1:47 pm Buzzing: Shares of Balaji Telefilms gained over 4 percent intraday as investors cheered the likely fundraising activity by the firm.

In a late evening exchange notification, the company informed the exchanges that a meeting of the Board of Directors will be held on July 20, 2017, to consider various fund raising options including raising funds through issue of securities on preferential basis, subject to approval from the shareholders of the Company and other necessary approvals, if any.

The company was in the news recently after one of its top executives exited the firm. It announced the stepping down of its Group CEO Sameer Nair from an executive capacity.

The market breadth was negative as about 1,465 shares declined against 1,039 advancing shares on the BSE.

ITC continued to reel under heavy selling pressure on hike in cess on cigarettes by the government.

1:05 pm Buzzing: Hindustan Unilever shares touched a fresh record high of Rs 1,190, up 3.2 percent intraday ahead of earnings for the quarter ended June 2017.

The FMCG major is expected to report flat growth in profit at Rs 1,175 crore against Rs 1,174 crore in same quarter last fiscal, according to analysts polled by CNBC-TV18.

Revenue is seen rising 2.7 percent year-on-year to Rs 9,040 crore while operating profit may increase 4 percent to Rs 1,700 crore and margin may expand 20 basis points to 18.8 percent compared with year-ago quarter.

Underlying volume growth is seen in the range of 2 percent degrowth to 2 percent growth against 4 percent each in year-ago quarter and previous quarter.

12:48 pm Bad loans: Indian banks need to provide a bare minimum Rs18000 crore additionally towards the 12 accounts identified by the Reserve Bank of India (RBI) for reference to the National Company Law Tribunal under the Insolvency and Bankruptcy Code in FY18, estimates India Ratings and Research (Ind-Ra).

Ind-Ra's analysis pegs the weighted average provisioning currently at 42 percent by banks towards the 12 identified accounts. Ind-Ra forecasts the additional provisioning to eat into banks' profits by around 25 percent in FY18. This indicates a shave-off in return on assets of 12bp in FY18.

12:40 pm Europe opening: Bourses in Europe opened lower with global sentiment dampened by a gridlock in US politics over healthcare reform.

The pan-European Stoxx 600 was 0.3 percent lower with most sectors moving south.

Markets in Asia fell from their two-year highs as the US dollar sank overnight. The greenback took another hit on Tuesday after the Trump health-care bill failed to get enough backing to proceed to a debate.

12:35 pm Buzzing: Transformers and Rectifiers (India) shares rallied as much as 7.5 percent in afternoon trade ahead of board meeting to consider fundraising plan.

The company informed exchanges that the meeting of board of directors will be held on August 3 to consider raising funds through issue of securities through qualified institutional placement (QIP) or preferential allotment.

12:16 pm Interview: Vinod Aggarwal, MD & CEO-VE, Commercial Vehicles, Eicher Motors, said the benefits of effect rate post GST were passed on to the consumers to the tune of 1.5 to 5 percent on all the models. Prior to GST the effective rates were from 26 to 31 percent. The company also has some benefits on input purchase prices, he said.

With regards to sales, he said the industry in the last 9-12 months went through many challenges be it demonetisation, move from BS III to BS IV, then GST. So, the sales are expected to go up from the festive month of September. However, in July and August volumes could remain muted and not negative, he said.

The CV sales for the company in the month of June dropped 20 percent.

According to average of estimates of analysts polled by CNBC-TV18, however, revenue may fall 1 percent to Rs 606 crore from Rs 614 crore YoY.

Operating profit may increase 21 percent year-on-year to Rs 77.6 crore and margin may expand 300 basis points to 13 percent in the quarter gone by.

The broader markets continued to outperform, with the BSE Midcap trading flat.

Talking on the above development, Hemant Kanoria, CMD, SREI Infra, he said the IPO is expected to come through in the next one month or so and they expect some money to flow into SREI through the IPO. 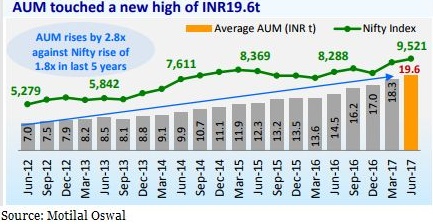 Equity AUM rose for the seventh consecutive month in June scaled to a new high of Rs 5.9 lakh crore (+1.3% MoM and +38% YoY). The increase in equity AUM was led by a rise in equity scheme sales while redemptions rose 38 percent on a MoM basis to Rs183 bn, it said.

10.15 am Market Check: The market continued to fall in morning trade, with the Nifty struggling below 9900 due to correction only in Reliance Industries and ITC.

About 1039 shares advanced against 965 declining shares on the BSE.

However, other stocks, including index heavyweights continued to support the market and helped benchmark indices trim losses.

10:00 am Earnings Estimates: FMCG major Hindustan Unilever, which is set to declare its June quarter earnings today, is expected to report flat growth in profit at Rs 1,175 crore against Rs 1,174 crore in same quarter last fiscal.

In June quarter 2016, the company had reported an exceptional gain of Rs 70.8 crore.

Topline and operational performance will be key to watch out for while the Street is divided on volume growth given uncertainty post GST rollout.

According to analysts polled by CNBC-TV18, revenue is seen rising 2.7 percent year-on-year to Rs 9,040 crore while operating profit may increase 4 percent to Rs 1,700 crore and margin may expand 20 basis points to 18.8 percent compared with year-ago quarter.

Underlying volume growth is seen in the range of 2 percent degrowth to 2 percent growth against 4 percent each in year-ago quarter and previous quarter.

The company's consolidated profit grew by 32.6 percent year-on-year to Rs 326.2 crore despite higher tax expenses. The growth was driven by strong operating income and revenue.

9:35 am MS downgrades ITC: Morgan Stanley downgraded the stock to equal-weight from overweight and reduced target price to Rs 285 from Rs 395.

According to the research house, the company will need 12-13 percent weighted average cigarette price hike hereon and will need 20 percent price increase in KSFT segment to offset tax increase.

9:15 am Market Check: Equity benchmarks opened sharply lower on Tuesday, with the Nifty falling below 9900 level, dragged by ITC after cess on cigarette hiked by the GST Council.

ITC crumbled nearly 14 percent as brokerage houses downgraded the stock after the Goods and Services Tax (GST) Council decided to increase the cess on cigarettes. Other stocks like Godfrey Phillips (down 10 percent) and VST Industries (down 5 percent) also caught in bear grip.

About two shares declined for every share rising on the NSE.