3:30 pm Market at Close: Equity benchmark indices ended the session on a positive note, but it trimmed some of its gains from the afternoon session. The Nifty ended above 9650-mark after clocking 9700 during the day's trade.

State Bank of India, ITC, and Bharti Infratel gained the most, while Baja Auto, Mahindra and Mahindra and Hindalco lost the most.

However, in previous six consecutive sessions, it shot up nearly 62 percent, especially after the new promoter - JSW Cement raised its stake in the company to over 50 percent.

In January, JSW Cement had bought 35.62 percent shareholding in Shiva Cement from its promoter, and then it has been gradually increasing stake.

3:00 pm Merger: The IDFC group and Shriram group are exploring options to merge various businesses to create a financial powerhouse worth of over USD 10 billion, sources told CNBC-TV18.

An announcement is likely to be made on July 8.

Through this agreement, the IT company and Kii have decided to jointly pursue business opportunities globally, by leveraging their complementing skills and strengths

"The partnership will combine Cyient's domain expertise and geospatial capabilities with Kii's internet of things platform to develop connected solutions through smart devices and applications. Under the terms of agreement, Cyient will also provide Kii with project delivery and implementation services," the software company said in its filing.

2:25 pm HPCL-ONGC merger? According to reports by CNBC Awaaz, the Divestment Department has issued a Cabinet note on merger of HPCL with ONGC. An in-principle approval will be taken for 51 percent stake sale in HPCL to ONGC, the report added. The nod will be taken in order to hand over HPCL's management control to ONGC and this divestment could be done through a strategic sale. A core group of secretaries approved the divestment in HPCL on June 20.

Further, the report added that a group of ministers will be formed to frame share sale guidelines, price and time frame of the merger and it is believed that finance, road and oil minister will be a part of this group.

2:15 pm Market Check: Equity benchmark indices extended their gains from the morning session, with the Sensex gaining over 200 points, while the Nifty neared 9700-mark.

State Bank of India, ITC and Indiabulls Housing were the top gainers on both indices, while Bajaj Auto and Sun Pharma lost the most.

Midcaps continued to gain, while among niche indices on the Nifty, PSU banks gained the most, followed by FMCG stocks.

The asset manager has so far shortlisted two names for its proposed IPO and two investment banking units have made attractive offers
to clinch the mandate for drawing a roadmap, according to sources.

On June 8, Reliance Nippon Life Asset Management (RNAM) had announced that it received approval from its board of directors for an initial public offer of AMC which would be subject to necessary regulatory and corporate approvals.

The Bangalore-based real estate firm has begun the financial year 2017-18 on a positive note by reporting 12.7 percent growth in sales volume and 11.9 percent in total sales value in June quarter QoQ without any new project launches.

"We continue to perform well in our principal market, Bangalore. While the Gurgaon market continues to gain momentum, we believe that the performance of other markets such as Kochi will improve going forward," Sobha said in its statement.

12:58 pm Oil recovers: Oil prices recovered some ground on strong demand in the United States, but analysts cautioned that oversupply would continue to drag on markets after a steep fall in the previous session.

The market breadth remained strong as about two shares gained for every share falling on the BSE. 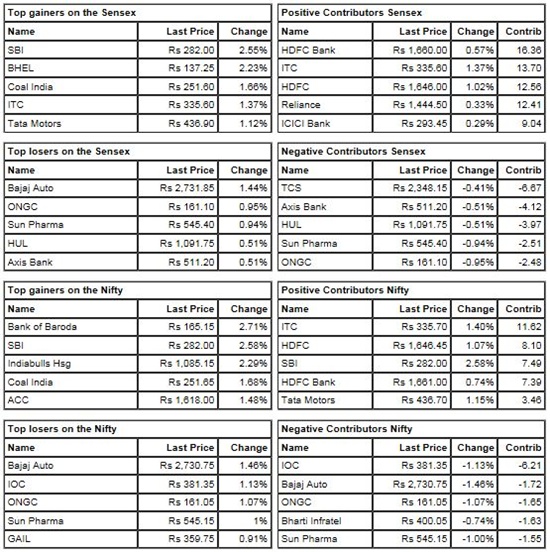 The approved product is the generic version of Wellbutrin XL of Valeant, which is used for the treatment of major depressive disorder and prevention of seasonal affective disorder.

This is the fourth approval received by the company from the USFDA during the current financial year.

11.30 am Market Check: Benchmark indices rallied further in late morning trade, with the Sensex rising more than 150 points on the back of strong rally in PSU banks. 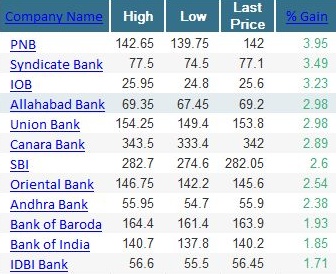 The broader markets continued to rally on strong breadth. About two shares advanced for every share falling on the BSE.

10:55 am Market Outlook: With the market's current trajectory, the question arises on the participation of retail and HNI (high net worth) investors in the current scenario. Emkay Global believes that the market seems to be in a consolidation mode right now.

''We have seen reasonable amount of profit taking and sector/stock rotation is the order of the day,'' Krishna Kumar Karwa, Managing Director, Emkay Global Financial Services told CNBC-TV18 in an interview.

He added that direct retail participation was muted and was largely through mutual funds or portfolio management services (PMS) or specialised advisory. Meanwhile, he said that HNIs continued to remain positive.

10:46 am Buzzing: Bharat Forge shares gained as much as 2.5 percent in morning trade after solid growth in orders for North America class 8 trucks.

Orders for the June month were also far better than 16,300 units in May.

10.19 am Market Check: Equity benchmarks extended gains in morning trade, with the Sensex rising more than 100 points after two-day consolidation and despite correction in Asian peers.

More than two shares advanced for every share falling on the BSE.

"The SPV, in terms of the concession agreement executed with the National Highway Authority of India (NHAI), has tied up with the consortium of lenders for project finance to the tune of Rs 1,461 crore," the largest highways infrastructure developer said in its filing.

Project is financed by consortium of lenders led by Canara Bank. Other members include Bank of India, Bank of Maharashtra, Oriental Bank of Commerce, Indian Overseas Bank, Andhra Bank and Aditya Birla Finance.

The concession period for the project is 21 years including construction period of 910 days.

"Total cost of the project Rs 2,088 crore will be funded by equity contribution of Rs 627 crore by the Company and the remaining amount will be funded by project finance of Rs 1,461 crore with average cost of approximately 10.65 percent per annum," IRB said.

9:40 am Buzzing: Shares of Punjab National Bank rose over 3 percent intraday as investors cheered an upgrade call on the stock.

Nomura, in its report, upgraded the stock to buy with a target price of Rs 180.

The brokerage house said that the incremental risk reward was favourable after 24 percent correction in two months. Further, it said that asset quality risks were largely discounted while pre-provisioning operating profit (PPOP) remains a pain point.

Having said that, it revised downwards its FY18 profit forecast by 56 percent, while FY19 forecast was unchanged.

However, it foresees 8 percent YoY decline in net income for its coverage universe including automobiles (inventory clearing due to GST), downstream energy (lower refining margins and adventitious losses due to recent correction in crude prices), pharmaceuticals (disruption in domestic formulation businesses again due to GST) and telecom (continuation of hyper-competitive sector activity).

9:15 am Market Check: Equity benchmarks opened moderately higher on Thursday, with the Nifty reclaiming 9650 level despite weakness in Asian peers.

The broader markets outperformed benchmarks, with the BSE Midcap and Smallcap indices rising 0.5 percent each. About 863 shares advanced against 260 declining shares on the BSE.

Asian markets traded weak despite the mostly stronger close on Wall Street, as oil prices recouped some losses after falling around 4 percent overnight.