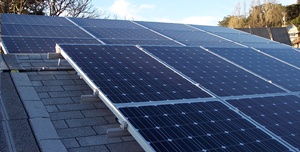 In its report published on Friday, the World Bank report lauds India for its commitment to solar power, innovative solutions and energy efficiency initiatives to support its vision of supplying its people with much needed electricity

''With its conscious choice to use significantly more clean energy to fuel its growth, India is contributing to global efforts to save the planet from the effects of climate change.''

With solar power increasingly being used to replace coal as a source of energy, the cost of electricity from solar photovoltaic (PV) is currently a quarter of what it was in 2009, and is slated to be slashed by another 66 per cent by 2040.

''Just a few weeks ago, the country also walked away from plans to install nearly 14 GW of coal-fired power plants, largely because it is as affordable now to generate electricity with solar power as it is to use fossil fuels,'' the World Bank noted.

The report also highlights Injdia's enormous potential in the solar segment, with access to as many as 300 days of sunshine every year, which is a major incentive for attracting foreign investment in the segment.

The impact is also duplicated in the market, with the sale of solar power units capped at Rs2.44 per unit or four cents per unit.

"The Indian government is setting ambitious targets that include 160 gigawatts (GW) of wind and solar by 2022, which will not only help hundreds of million people light their homes, but also enable children to study at night, provide families with refrigerators to preserve their food or TVs to entertain themselves," the report noted.

India is playing its part well, the World Bank report noted, as the Paris Climate Agreement aims at containing the increase in global warming to under a 2-degrees Celsius. ''It is imperative for India – the third largest emitter of carbon dioxide - to be a global leader on renewable energy.''

The World Bank said it is committed to supporting India's solar push. Starting with a Grid Connected Rooftop Solar project that aims to put solar panels on rooftops across the country, 100MW of energy has already been financed through this project, it noted.

This has been achieved within one year of World Bank signing an agreement with the International Solar Alliance (ISA), consisting of 121 countries led by India, to collaborate on increasing solar energy use around the world and mobilize $1 trillion in investments by 2030, the report noted.

The World Bank's backing will increase the availability of private financing, introduce new technologies, and enable the development of common infrastructure to support privately developed solar parks across India, it added.

The Bank is also supporting India's UJALA program, through which the country has distributed more than 241 million LED bulbs, making it the largest and the first zero-subsidy national LED lighting program in the world.

Residential consumers can get LED bulbs from UJALA distribution centers or through participating retailers and pay upfront or in smaller installments, which make the bulbs more accessible for poorer customers.

The programme has helped save more than 6,000 MW of energy and resulted in a 25-million ton reduction in CO2 emissions per year. India plans to replace all of its 770 million incandescent bulbs with LEDs by 2019.

In turning to solar, India has sought creative solutions to challenges such as limited land availability to host solar panels for a rapidly growing population. It must go beyond what Morocco has done, for instance, with its concentrated solar power that requires large tracts of land to set up giant mirrors and lenses. So, in addition to its solar parks, it also has ambitious plans to only sell electric cars by 2030.

India's greenhouse gas emissions are predicted to keep increasing at least until 2030 – something it is working hard to change with serious energy efficiency measures.