India must shift energy focus from oil and coal: Pachauri

Environmentalist R K Pachauri has called for a balanced energy policy limiting the use of hydro-carbon fuels aimed at restricting the effects of climate change and helping sustainable development, even as he emphasised the need for decarbonising electricity generation. 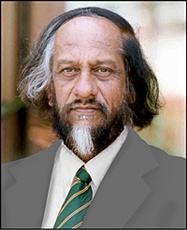 Pachauri, who is the chairman of the Intergovernmental Panel on Climate Change (IPCC), termed India's decision to increase the number of coal-based power projects as a "wasteful approach" and pressed for the use of renewable and nuclear energy sources to satisfy the country's power needs.

"We would need to decarbonise electricity generation. Renewable energy technologies are an option, nuclear energy could be an option," he said while speaking about the threat posed to climate by carbon-emitting coal-based power sector.

''Limiting the effects of climate change is necessary to achieve sustainable development, equity and poverty reduction,'' Pachauri, who is also director-general of The Energy and Resources Institute (Teri), said.

He emphasised the country needed a new energy regime. "I am really concerned about the growing dependence of India on oil imports and the present situation in Iraq is adding to it," he said, adding growing exposure to climate change in India would have an adverse impact on the country's economic growth, health, development and poverty situation.

Citing IPCC's fifth assessment report, Pachauri said there was 95 per cent certainty human influence had been the dominant cause of the global warming seen since the mid-20th century.

''Limiting the effect of climate change will require sustained and substantial reduction in greenhouse gas emissions," Pachauri said while speaking at the United Nations Public Lecture in New Delhi on Saturday.

Total anthropogenic greenhouse gas emission had continued to increase from 1970 to 2010 and the rise registered between 2000 and 2010 was the highest in human history, he added.

The primary barrier to eradicating poverty was the fact that the poor lacked access to energy resources, he said. "India has the largest number of people lacking access to electricity and clean cooking fuels in the world.''

Noting that major investment and time goes into coal-based energy generation in the country, Pachauri said by that time 300 million people, who are electricity deprived, can be served power using renewable energy sources.

He said huge losses are involved in transmission and distribution of electricity generated from coal-based power plants.

"There is a huge amount of loss at various stages...to my mind that is clearly very wasteful approach. And today we have the benefit of renewable energy technology, which if you take all the costs and all the benefits into account, is clearly a winner in economic terms," Pachauri said.